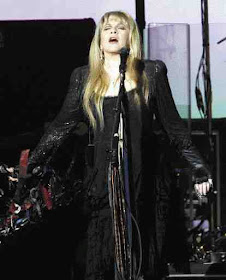 
It may be the most successful breakup story of all time. Not only did the damaged relationships of Fleetwood Mac yield one of the most popular albums of all time, but the band is still on stage together, mostly, and playing songs you'd have to be completely clueless not to know.

It was music from the aforementioned album, 1978's Rumours, that got the most attention Friday at Fleetwood Mac's Credit Union Centre show. And former couple Stevie Nicks and Lindsey Buckingham, whose fallout inspired many of the band's pain-infused songs, stole the spotlight.

Nicks and Buckingham were joined by bassist John McVie and the lovable oddball, and band namesake, Mick Fleetwood, whose signature Rumours ponytail is still flowing, albeit much greyer.

Fleetwood Mac has had regular personnel changes since forming in 1967, but the incarnation most are familiar with was fully represented Friday night, save for Christine McVie, who is no longer touring with the band. Several of her best-known songs -- Little Lies, Over My Head and You Make Loving Fun -- were noticeably absent from the set. But the show still showcased most of the American/British band's finest.

The show opened with the song Monday Morning. Buckingham and Nicks took the stage hand in hand, one of several gestures -- which later included a prolonged hug -- to prove just how over the past they are. The first song segued into the darker The Chain, followed by Dreams, before which Nicks exclaimed, "We figure we might as well just get the party started." Great song? Yes. Party music? No.

The band made no attempt to gloss over past personal problems -- why would they, considering how profitable they were? -- with Buckingham saying, "Fleetwood Mac has had a fairly complicated, convoluted emotional history. At the end of the day, it has actually worked in our favour."

Nicks -- at 61, still dressed in her signature drapey, gypsy-like garb and singing into a scarf-covered microphone stand -- doesn't try to hit the higher notes anymore, but has retained that inexplicably sexy, smoky quality that makes her voice so special.

The foursome -- backed by three singers and two extra musicians -- definitely left the enthusiastic audience satisfied. The band barrelled to 21/2 hours of hits, including Gypsy, Go Insane, Second Hand News, Sara, Say That You Love Me, Go Your Own Way and Gold Dust Woman. A highlight for Nicks was her performance of Rhiannon, a song that sounds better the older she gets. The encore included the crowd favourite Don't Stop.
Nickslive at Saturday, June 06, 2009
Share