Mick Fleetwood, the iconic co-founder of Fleetwood Mac is celebrating his blues heritage with Blue Again, a stellar Live DVD Companion that follows the GRAMMY NOMINATED, chart topping CD of the same name.

Recorded Live in London, Mick Fleetwood revisits the blues and the blues-oriented classic songs of Fleetwood Mac by teaming up with with guitarist and lead vocalist Rick Vito, bassist Lenny Castellanos and keyboardist Mark Johnstone. This powerhouse blues project features versions of early Peter Green-penned hits such as 'Black Magic Woman,' 'Albatross' and 'Rattlesnake Shake' as well as original material composed by Rick Vito (with a rollicking version of Elmore James' 'Shake Your Moneymaker' included for good measure).

Produced by Mick Fleetwood and Rick Vito, BLUE AGAIN DVD was recorded live in London in February of 2008. The immaculate recording gives the songs a vibrant, modern immediacy which transcends easy nostalgia. Says Mick in the liner notes: 'Over my career I've been called a pop star and a rock star, yet in my inner heart, I will always be part bluesman. On my journey from blues to a life of rock n roll, I've always remembered where I started.' BLUE AGAIN is both an original musical tour de force and a respectful tribute to Fleetwood Mac (in the midst of celebrating their 40th Anniversary), initiated by the sole member of the band to be in every incarnation from the beginning. 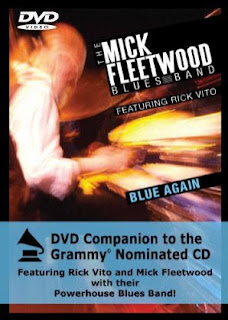 Pre-Order The DVD at Amazon - Due for release in late January, 2010.


ON TOUR FEBRUARY AND MARCH, 2010 IN AUSTRALIA AND NEW ZEALAND

For More information on The Mick Fleetwood Blues Band Featuring Rick Vito and to stream the "Blue Again" album please visit these websites.