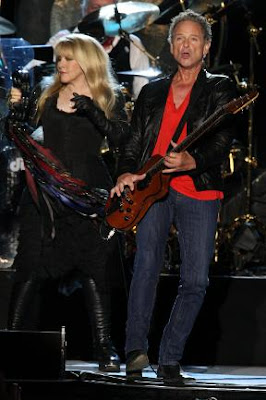 
THIS is not meant to be a story about change. Things don't change in a hurry, if at all, in what the Americans call heritage rock. As in, solid as a rock. As in, preserved just as it was when we first saw it rock.

This of course is hardly going to cause complaints in an audience who have come for the security and comfort of the familiar: if they wanted new songs, they would buy a new album by some new artist. And what's an MP3 anyway? 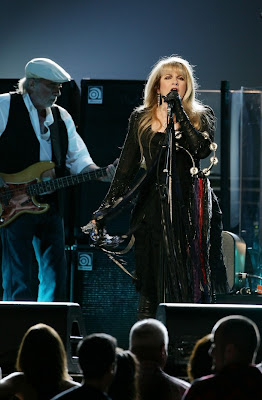 The structure of this tour is much the same as five years ago: the songs - the hits, naturally, with one song each from a Lindsey Buckingham and Stevie Nicks solo album; the solo spots (Buckingham alone for Big Love; Buckingham and Nicks duet for the excellent Landslide); and the solos (Buckingham, as often as possible; John McVie briefly and Mick Fleetwood once).

There were also the absences. Without Christine McVie's songs this show is diminished and let's not get started on the wiped-from-history pre-1975 versions of Fleetwood Mac. And the additions (the multiple extra voices and instruments augmenting the remaining parts of the ''classic'' line-up).

But there were some changes worth noting and not just the fact that Mick Fleetwood's banal drum solo, complete with gibbering, was kept to less than 10 minutes (oh hallelujah!). Or that apart from occasional great moments such as Second Hand News and the set-closing Go Your Own Way, tempos and energy levels were frustratingly half a pace off, deadening songs such as Storms.

First, while Nicks's voice is in even poorer state than five years ago - the top range is long gone, the middle range is wobbly and songs such as Rhiannon can never recover - and her movements more stiff and limited, she seemed much more engaged with the songs, the audience and her bandmates this time.

On the other hand, a self-satisfied Buckingham was even more over the top, balancing his evident status as the healthiest and most capable musician in the band with a tendency to mug furiously and ridiculously. Perhaps unwittingly his voice was considerably louder than anyone else's in the mix so that when he and Nicks sang together her voice disappeared.

Not that the audience, wildly applauding anything and everything and offering standing ovations freely, minded. That's another thing which never changes.
Nickslive at Wednesday, December 09, 2009
Share