TAYLOR SWIFT has lashed out at the 'mean' critics who slammed her off-key Grammy night duet with STEVIE NICKS in a candid new song from her upcoming album "SPEAK NOW". 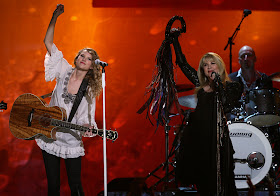 The 20-year-old star was panned for her lackluster vocals at the awards show last January (10), which Swift's team blamed on technical issues.
And now the singer is speaking out about the controversy in a track called "Mean" from her new record."
Full Article Includes Lyrics
Nickslive at Tuesday, October 19, 2010
Share