It’s an “Oprah-palooza!” Some Details From The Musical Icons Appearing on Oprah 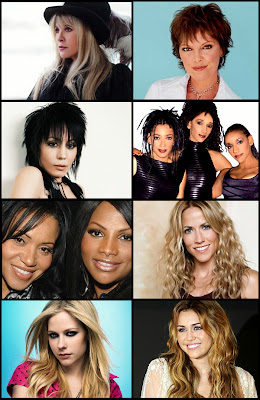 
It’s an “Oprah-palooza!” Today’s once in a lifetime television event features some of the greatest rock goddesses, hip hop legends and disco divas ever, including Rock and Roll Hall of Famer Stevie Nicks, “Godmother of Punk” Joan Jett, hip hop legends Salt-N-Pepa, and rock icon Pat Benatar! These trailblazing music legends are here to rock our world as they sing some of their biggest hits with some of the music superstars they’ve inspired along the way. Plus, don’t miss the grand finale performance you’ll be talking about for days to come! Today’s “Oprah!”
Not mentioned in the above show description, but also appearing are Sister Sledge, who along with all the other ladies reportedly closed the show with "We Are Family".  The next younger generation of music superstars that have been inspired by the featured guests and who also appear on the show are: Sheryl Crow, Avril Lavigne and Miley Cyrus.  Miley and Joan Jett were spotted out to dinner the night before in Chicago at former Oprah Chef's restaurant Table 52, they possibly could be collaborating or performing together...
For Stevie's part: According to various sources, Stevie sang two songs one with Sheryl Crow plus her new single "Secret Love"... Stevie was also interviewed by Oprah, and apparently the only one interviewed by Oprah during the taping...  Reports have Stevie closing the show or the taping with "Secret Love" but with "We Are Family" reportedly being sung by all the ladies, and by the description above, the "grand finale" Stevie's Secret Love performance will likely be sliced in during her segment.
So it looks like it's going to be a pretty exciting show next Wednesday...Hopefully, nothing is cut for time.
Can I get a show of hands on who's taking the day off work or rescheduling their day so not to miss the show?
WOW!... Next week is starting to look really full:
[update] 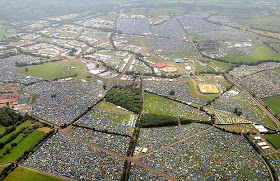 Great News for UK Fans
Matt Denison who was one lucky fan flown in from Ottawa, Canada had a back stage meet and greet with Stevie {his story is here} just reported that Stevie confirmed she IS playing the Glastonbury Festival in the UK in June...No specific date given.  She also said she's looking to play places she hasn't been to in awhile... The bad news about Glasonbury is the festival usually sells out months and months in advance, so those that don't have tickets now may be left out.  Hopefully she will add more to her UK Itinerary!    Glastonbury info here
Also... The Secret Love performance was filmed but will be an Oprah.com exclusive... What does that mean?  Do you need to be a forum member?
Nickslive at Friday, April 08, 2011
Share