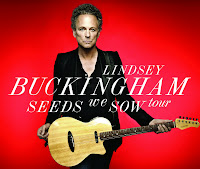 Lindsey Buckingham unfortunately needs to postpone his upcoming UK/Ireland shows as his guitarist has severely injured his back and is not able to presently perform.  All tickets will be honored at the soon to be announced rescheduled dates.
December 9th Update:
Because of Neale's severely injured back, Live Nation UK announced today ALL UK and Ireland Tour Dates have been cancelled with no dates to be rescheduled in 2012. Disappointing news for fans in the UK and Ireland.

Sending best wishes for a speedy recovery to Neale.... I hope he'll be okay!  and I hope that for those that have booked travel plans, that you can change them.


December 4th:
Update on Neale's situation - From someone that's close to him:

Neale has been going through some serious trouble with his back on nearly the entire SWS tour, and is scheduled for surgery at the end of the month to take care of this issue. Thank you to all of you who have wished him well, and who have been compassionate and understanding of the circumstances. Lindsey's band members are not replaceable, they are his family and have become so over the decades. It's not as easy as calling someone else, rehearsing for a while and getting that same comfort level as the well-oiled machine that they already have. Let's all come together and accept the postponement, however disappointed we may be, and extend positive vibes to the guy who needs it. Thanks!