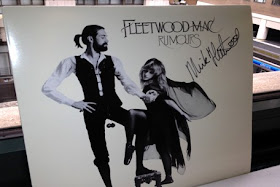 Still waiting on a new Fleetwood Mac tour? Join the club. Members of the legendary rock group have said that they'll be on the road next year, but we've still yet to hear any concrete plans.

But oh well. It's the holiday season, and that means Spinner has some gifts for you. This time, we're giving away two vinyl copies of the band's 1977 landmark album 'Rumours' and the best part is that they're signed by drummer Mick Fleetwood.

Giveaway rules: To enter the giveaway, follow @Spinner on Twitter and retweet this tweet about Mick Fleetwood and Nicole Atkins' "Off the Record" video with the hashtag #giveaway.

Or, you can just leave a comment on SPINNER about your favorite part of the video on the site or email us at spinnergiveaways@aol.com. The giveaway begins at 5PM Eastern Time ("ET") on December 21, 2011 and ends at 6PM ET on December 28, 2011. One winner will be chosen at random and notified on December 29, 2011 via a Twitter DM or via email. Be sure to read the official contest rules. Good luck!
Nickslive at Wednesday, December 21, 2011
Share