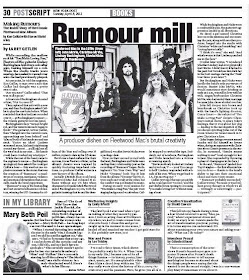 While recording the mellow rock hit “You Make Loving Fun,” Fleetwood Mac guitarist Lindsey Buckingham laid down solo after solo, feeling himself on a roll. When the studio tracks were used up, he needed to record over solos he had previously played.

At one point, he told the engineer, Ken Caillat, to tape over a solo that Caillat had thought was a pretty sweet take.

“Are you sure?” Caillat asked. “That was really great.”
A frustrated Buckingham shouted at him, “No! Go over it!”

They replaced that solo with a new one, and then Buckingham asked Caillat to play the one from before. When reminded that they had just recorded over it — at Buckingham’s request — the volatile guitarist lost his mind.