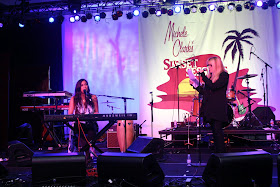 Vanessa Carlton announced last night that she will be opening for Stevie on the following dates:

Vanessa is out on the road in support of her fourth album Rabbits on the Run which was released in July, 2011. Amazon


"Sometimes music is a purely spiritual experience.  That's how I feel when I watch Stevie Nicks.  Miss Nicks is her own breed of shaman, and I'm psyched to announce that while she is on tour next month I will open a few shows.  I'm totally honored and excited to see my friends again.  I highly recommend coming out and getting a glimpse.  It’s always inspiring to see a pure artist like Stevie.  As for moi?  I’ll play a little set...mostly stuff from Rabbits, a few ear worms and will test out some new ideas (all with the violinist Skye Steele)."


Vanessa and Stevie have a long history of friendship and musicianship... Vanessa has opened for Stevie a number of times in the US and in Australia in 2005 and 2006.  Stevie appeared on Vanessa's album Heroes & Thieves where she added background vocals to "The One". Vanessa appeared with Stevie on 2009's "Live in Chicago" DVD where they performed "The One".  Most recently, Stevie lent her support to Vanessa in Carlsbad, CA in February, 2011 during The Sunset Sessions, which is a music industry event.

Nice to see her back!