McKinney -- Every seat in McKinney Performing Arts Center was filled August 23, and for a very good reason. Lindsey Buckingham, the driving force behind Fleetwood Mac was in town for a solo performance.

Buckingham, a member of The Rock and Roll Hall of Fame, is on Rolling Stone's Top 100 Guitarists of All Time and the audience in McKinney had an intimate glimpse at the unique finger-picking style that has become this man's calling card.

This wasn't a Fleetwood Mac concert, replete with soft piano and subtle harmonies. This was the sheer unleashed genius of Lindsey Buckingham, one of the most innovative forces in rock and roll in the period between Jimi Hendrix and Kurt Kobain. None of that was lost on the standing-room-only crowd at McKinney Performing Arts Center as an appreciative audience showered Buckingham with standing ovations throughout the concert. 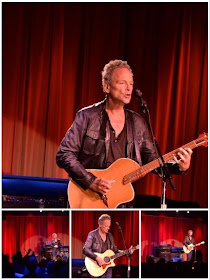 No reviews for this show... But Lindsey slid in "Rock Away Blind" to the set (by audience request) saying "they keep asking me to play this damn song!"  Even though he was reluctant and unprepared to play the song - it sounded great! 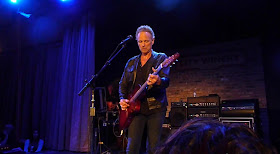 Lindsey walked a thin line during the second show at City Winery in Chicago last night (August 27th). Not one, but two requests were fulfilled by Lindsey playing a few lines of the Tusk song "Walk a Thin Line" - which from the short video clip I've seen, sounded really amazing!  Even though it was only a couple of lines from the song, I think this was the first time its ever been played live!  PLUS he played "Rock Away Blind" at the second show.

The Chicago outpost of New York's City Winery has sort of been slowly rolling out the welcome mat over the past three weeks with a flurry of soft-opening and press events, a week's worth of Lewis Black shows, and a few musical acts to break in the venue. Last night, the second of two sold-out shows by legendary guitarist Lindsey Buckingham provided a great opportunity to really see how the new venue is settling into Chicago's musical landscape.

Buckingham, who will always be inextricably known for his contributions to Fleetwood Mac, opened his show talking about balance, and the contrast between what he called "the big machine" (Fleetwood Mac) and "the small machine", that being his solo efforts, and ultimately, this truly solo tour with just him and guitar in the stage lights. While it's easy to roll your eyes at a "small machine" that still apparently needs to employ no less than a dozen guitars, nine amps and cabinets and a dedicated guitar tech, ultimately, Buckingham has a point. Buckingham is responsible for many of Fleetwood Mac's biggest hits, and his solo performances offer a chance to see these songs, as well as those from other periods of his musical life, in an elemental state, absent most of Fleetwood Mac's accumulated baggage and any stadium bombast. Buckingham can rightfully claim to be one of rock's greatest guitarists, employing a truly singular finger-picking technique that gives him an extremely unique sound. On most of the night's songs, such as "Bleed to Love Her" and "Go Your Own Way," Buckingham's finger picking-style drove the songs, offering well-crafted, straightforward takes. Only occasionally did he seem the arena rock star, as on "Come" where he created an extended loop, then deftly segued into a solo over the playback, or on "I'm So Afraid" where he employed a backing track and launched into a lengthy jam. Clearly, there were some die-hard fans in attendance, and the hushed and reasonably sedate crowd proved the perfect audience, and Buckingham's solo show the perfect act, for City Winery's set up.

Seeing Buckingham in this setting was similarly both worrying and revelatory.

At first, it screamed cautionary tale. As he himself admitted Monday, the second of a two-night stand at City Winery, his now-lengthy chain of solo tours have whittled down from a 10-piece band to just this current incarnation: Lindsey alone, with just a rack of guitars, a few occasional backing tracks and his many O-faces for company. Watching this mega-selling mega-talent take such an intimate stage -- surrounded by people eating paella balls and sipping cab franc -- was at first like discovering a great actor reduced to doing dinner theater in Florida.

But, as in our interview last year, Buckingham on Monday sermonized from the stage about the relative virtues of the "big machine" (Fleetwood Mac, which is making noise about another reunion next year) and the "small machine" (the eponymous albums and tours). He referred to the latter as a "strange little experiment," despite the fact he's managed to produce three solo albums (plus two live sets) in the last six years -- without the band's trademark hijacking of his material. He still worries about "feeling unseen" ("Not Too Late"), but he's determined to keep powering the little machine until it makes a noise that can at least be heard above the grinding gears of his bread-and-butter factory.


With the massive success of Fleetwood Mac hovering over his head, it took a couple of decades for Lindsey Buckingham’s status as an honest to goodness grade-A auteur to sink in. Sure, he always earned and deserved credit for revitalizing the British blues band as a Cali rock force, but despite the considerable talents of his cohorts, somewhere along the line Buckingham became the least expendable member of the bunch, his vision vital to keeping the group focused even when it sometimes seemed to be sending it off track. That’s one reason why the wayward but wondrous Tusk (with its curious “special thanks from the band to Lindsey Buckingham” credit) has become many fans’ dark horse favorite: What was once misread as indulgence turned out to be innovation, and Buckingham hasn’t really taken the safe route since.

Admittedly, Buckingham’s perfectionist tendencies do a great job disguising, if not suppressing, the strange, which is why catching him live is a unique opportunity to see his numerous hits, misses and never-had-a-shots stripped down to their essence, often remodulated by the master outside of their more familiar studio contexts. Indeed, watching Lindsey Buckingham—tan, fit and in strong voice at 62—perform a solo set at the City Winery Sunday night, the first of two shows, it was remarkable how much he was able to bring across with just his voice and guitar, minus most of the fussy (albeit cool) Baroque ornamentation that has marked Buckingham’s work both within and without Fleetwood Mac.


Starting out the show, Buckingham took a moment to offer a few words on why this show would be different from what he dubbed "The Big Machine" (AKA Fleetwood Mac).  On Sunday, "The Small Machine" consisted of Buckingham, a bevy of guitars, the occasional drum machine loop and a tech that earned his keep tuning guitars at a frantic pace at the foot of the stage, trading them off to Buckingham following literally every song of the seventy-five minute set.  I lost track of whether Lindsey actually played a different guitar on every song...  But he definitely switched guitars following every song.  Solid body acoustics, electric acoustics... you name it and it was probably played by Lindsey Buckingham Sunday night.

As what I've always considered to be the true creative force behind Fleetwood Mac's finest moments, Buckingham somehow remains an extremely underrated guitarist.  He's one of my all-time favorite players and his finger-picking skills were on full display at City Winery.

There are times during a solo Lindsey Buckingham set where you could close your eyes and envision about three guitarists performing in front of you.  And yet, you open them to find only one man responsible for the rhythm, melody and notes enveloping your senses.