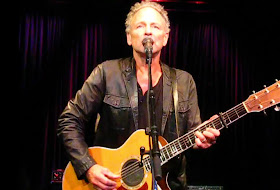 
Roughly 40 minutes into a revealing, intimate show at Austin blues club Antone's on Wednesday, Lindsey Buckingham essentially dared his audience not to sing with him. Teasing the opening of the undeniable Fleetwood Mac hit "Never Going Back Again" on his eighth different guitar of the night, Buckingham sang the song's opening line in a voice so faint atop finger picking so precise that any crowd accompaniment would've crushed the moment.

The fans recognized this, and they stayed hushed as the song built to a winding, Graham Nash-ian guitar solo, reaching its high point with Buckingham belting out reworked lines – "been down three times!" – before settling into the familiar sing-along chorus.


"Buckingham showed that his "small machine" moments can be some of the most thrilling and satisfying of his career."