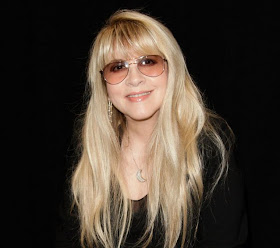 After a busy 2012 promoting and touring behind her latest solo album, In Your Dreams, Stevie Nicks is turning her full attention to Fleetwood Mac in the coming year.  The band will hit the road for a lengthy North American tour in early spring, and Stevie says her New Year's resolutions are all about her work with the Mac.
"I'm just going to work as hard as I can to make this Fleetwood Mac thing be as great as I know it can be," she told ABC News Radio.  "It is a lot of work, and it takes a lot of thought, but we're all really willing to do that."
She added that maintaining her health also will be a part of her commitment to the band.  "My resolution is always to just do what I do and do it well," she noted, "[and] take care of myself on the other side of that, physically, and make it great."
Prior to the tour kickoff, Stevie and the band plan to put out a couple of recently-recorded new songs.  While Stevie admits she isn't sure about the when, where and how when it comes to the release of the new tracks, she says she's very excited about them.
"I don't think [the record company reps have] exactly decided what they're gonna do or how they're gonna present [the songs]," she tells ABC News Radio.  "But, whatever, I can tell you they're done, and they sound amazing.  So, they're gonna fly out there into the world in some way, shape or form."
Fleetwood Mac's North American tour leg kicks off on April 4 in Columbus, Ohio, and is scheduled through a June 12 show in Detroit.
2013 ABC News Radio