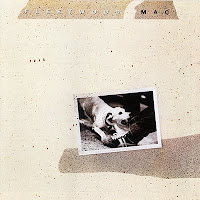 
In 1979, Fleetwood Mac recorded Tusk. At a cost exceeding 1 million dollars, and taking up two years in studio time, this double album was a significant departure. Under the artistic direction of Buckingham, the twenty-song project mixes a variety of musical styles in a fragmented technical whirlwind. Surrounding the concise songwriting of McVie and Nicks is the spontaneity of Buckingham. However, the anchor to this music is the inimitable rhythm section of Mick Fleetwood and John McVie. It is hard to think of another bass/drum partnership that is so fluent and cohesive. Side 1 opens with a subtle atmospheric number (“Over And Over”) that showcases McVie’s soulful alto, and the blended backup vocals. The next song is more experimental with Buckingham adding some New Wave guitar jaggedness. The juxtaposition continues with a buoyant love song (with impeccable harmonies) arranged in a joyful, British folk romp (“Save Me A Place”). The side concludes with Nicks’ ruminative “Sara”. Her deep-throated singing is compelling and the ethereal backup singing on the bridge is exquisite.