Fleetwood Mac Live 1977 Rumours Tour: "This is the holy grail for Mac fans" 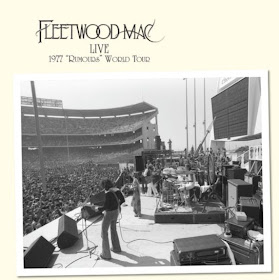 It’s certainly not news that Fleetwood Mac’s “Rumors” is a pop masterpiece, a high-water mark in the annals of ’70s California-based rock and pop. Very few self-respecting record collectors or rock historians would consider their collection complete without it. We all know the story of its creation – how the songs reflected the romantic turmoil within the band, as various relationships crumbled, principally the very torrid one between singer Stevie Nicks and guitarist/songwriter Lindsey Buckingham. What we may not know is what a fantastic live ensemble this particular lineup of Fleetwood Mac was. This new anniversary edition gives us a beautifully remastered version of the original album, with the inclusion of the revered outtake “Silver Springs” tacked on, and a whole disc’s worth of alternate versions and outtakes, too. But the grand prize is the full live concert from the 1977 “Rumors” world tour, which takes up a full disc. This is the holy grail for Mac fans, and makes the anniversary edition a must-have. 4 stars (Jeff Miers - The Buffalo News).

The Live component of the re-release can be streamed in it's entirety at Rolling Stone.

Despite tragedies, drug excesses and separations it Fleetwood Mac 1977 managed to take one of the most successful pop albums. Now the united band is back on tour and released anniversary edition is one of "Rumours". "Go Your Own Way" and "Dreams" - these sellers are selling the album "Rumours" publish 45 million times, although it appeared 36 years ago, Fleetwood Mac a "35th Anniversary Edition" with three albums (including session recordings and live recordings). As a blues band Fleetwood Mac 1967 have begun. After Lindsey Buckingham and Stevie Nicks got on and changed the sound toward Softpop and mainstream rock, came the great success. Even the album "Fleetwood Mac" could sit up, followed with "Rumours" then the climax: 31 weeks, the album was number one on the Billboard charts and received a Grammy. In the list of "500 greatest albums of all time" by the magazine "Rolling Stone" is "Rumours" in the top 30 During the recording there was the purest sense of chaos. Singer Stevie Nicks has compared the history of Fleetwood Mac with a soap opera: The marriage of Christine and John McVie was as broken as the relationship of Lindsey Buckingham and Stevie Nicks. Drummer Mick Fleetwood was allegedly having an affair with Stevie Nicks. The well-known in an interview with "U.S. Magazine": "It was quite scandalous and incestuous." All these feelings dramas and separations were finally processed in the songs. The Canadian newspaper "The Globe and Mail" called "Rumours" even the "unofficial soundtrack to the distinctive culture". The History of Fleetwood Mac but is not over: The band, which was recorded in 1998 in the "Rock & Roll Hall Of Fame", has reunited and goes on To urnee - to Germany. In October, she will be in Cologne, Stuttgart and Berlin - but without Christine McVie.