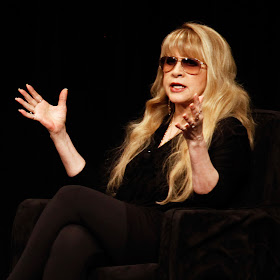 
“You do not mess with a married man,” Stevie Nicks says. She knows what she’s talking about.

A ripple of unsustained ardour: That’s what went out when the news hit recently that Stevie Nicks will be stopping in  Toronto next month in support of a new documentary by and about her, In Your Dreams.

Having game-changed and inspired and lived to tell the tale, been to the moon, Betty Ford and back, the Fleetwood Mac frontwoman brings out a very special denomination of devotee. April 15. King Street. Sundown. That’s when one of the last of the old-school rock stars is set to appear at two back-to-back unspoolings of a film that shares its names with her last solo album and was co-created with her producer, Dave Stewart of The Eurythmics. And if her appearance at the South By Southwest festival, in Austin, last week, is any indicator, her Q&A-appointments, here at TIFF Lightbox, will not be rote. Simply put: the woman gives good mantra.

Sitting down with NPR the other day for a long live-in-person — particularly about those heady times in the ’70s when the band put out an album in May and “by September or October” she and collaborator Lindsey Buckingham were millionaires — she offered her own Sheryl Sandberg-isms about being a woman in her biz. Lean in? Been there … done that! Looking around the club she was suddenly part of back then — the Eric Claptons, the Mick Jaggers, etc. — she decided, “we can never be treated like second-class citizens … so when we walk into the room, we have to walk in with a big attitude. Which does not mean a snotty, conceited attitude. But it means we have to float in like goddesses, because that is how we want to be treated.”

As for men, get your own! So insists the goddess, speaking from experience. Getting onto the subject of adultery — inspired by her watching the new Anna Karenina movie — Nicks shares, “I have done exactly what [Anna] did. And do you know what it got me? Nothing. It got me misery and unhappiness. … And bad karma.”