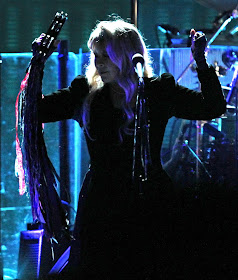 
I got caught in the “Landslide.”

No matter how many times I’ve heard that song, both on CD and in concert, it never fails to create a rush of emotions for me. That’s one of those songs that has greater meaning each time I hear it. Stevie Nicks never fails to make me reflect and reminisce.

So when she sang “Landslide” Tuesday night before a packed American Airlines Center, with Fleetwood Mac band mate Lindsey Buckingham on acoustic guitar, I got lost in memories. I felt my eyes watering. Then I smiled. That is the power of timeless music.

Fleetwood Mac is as familiar to me as an old T-shirt that I only wear around the house. I’ve been a fan since 1975. I’ve seen the band onstage at least three times, once with Christine McVie even, who sadly no longer tours. I could script Nicks’ shawl interchanges depending on the song she sang – a glittery gold one for “Gold Dust Woman,” the sparkling black one for “Rhiannon,” and either a red one or a black-and-gold one for “Stand Back.” I’ve seen Buckingham deliver his mesmerizing guitar and vocal performance during “Big Love,” the one that leaves him breathless.

It never gets old.

For more than two hours Nicks, Buckingham, drummer Mick Fleetwood, bassist John McVie, and four extra touring musicians including a couple of female background vocalists delivered a well-rounded smattering of tunes from Fleetwood Mac albums harking back to 1975′s self-titled white album and culminating in a pair of cuts from the digital-only Extended Play released in late April. “Sad Angel” rocked hard, while “Without You,” a long lost track from the Buckingham Nicks days, had a sweet, homespun feel.

Tusk, the daring 1979 follow-up to 1977′s monster album Rumours, was well represented, more so than ever. The title cut started slow, ominous before it exploded in chugging drama. It was another showcase for Buckingham’s powder keg vocals and his astonishing electric guitar finger picking. Nicks performed “Sisters of the Moon,” which she told us hasn’t been done onstage since 1981. Buckingham relished every moment of “Not Too Funny” and Nicks graced us with a sublime rendition of “Sara.”

Nicks’ voice naturally isn’t what it used to be back in the ’70s glory days. Many songs, especially “Rhiannon” and “Dreams,” are now sung in lower keys than originally written. But she has actually managed to keep her pipes strong during the last decade. I marveled at how clear and lovely her singing was during “Gypsy.”

These songs hold up. Buckingham’s stinging “Go Your Own Way” still shakes your insides. It’s an anthem with a soaring kiss-off chorus. Onstage, arriving just before two encores, it was madcap fun. The crowd, myself included, was on its feet singing at full blast. It’s easy to get caught up in the rush of timeless music. 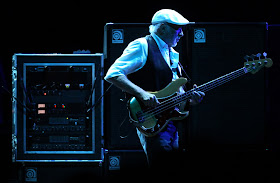 
DALLAS When Lindsey Buckingham swung through Fort Worth and McKinney on a small-hall solo tour last year, he talked about how the “big machine” -- Fleetwood Mac -- helped fuel the “small machine” of his solo career, and vice versa, and how it took some growing up for him to realize that he needed both in his life.

Judging from Tuesday night’s Fleetwood Mac concert at American Airlines Center, the big machine is in fine working order, despite all the bumps and dents, changed and missing parts, and much, much mileage that extends to well before Buckingham and Stevie Nicks even joined the band.

And the machine worked well as a unit. At times, especially on post- Rumours albums, it often sounded as if the band’s three singer-songwriters (including Christine McVie, who’s not in the current lineup) were trading off solo work that just happened to feature really strong backup musicians, because the singers’ personalities had become so strong. But in Tuesday’s concert, Buckingham and Nicks played seamlessly off each other, tied together by the strong rhythms of drummer Mick Fleetwood and bassist John McVie.

Not that there weren’t moments with echoes of solo-act self-indulgence, such as when Nicks did her solo hit Stand Back or when Buckingham did an unaccompanied, acoustic version of Big Love (prefaced by a monologue about how the meaning of the song’s meaning has changed for him, which he also did on his solo tour). Even Fleetwood got into the act, with a drum solo during the middle of Monday Morning that came complete with the drummer’s egging-on-the audience narration. But for the most part, this was a show that highlighted Fleetwood Mac’s strengths as a group, with Buckingham and Nicks showing stunning chemistry, despite -- or because of -- all they’ve been through together.

When the two singers faced each other while singing Buckingham’s Go Your Own Way and Nicks’ Silver Spring, it was hard to forget that these were songs they wrote about their disintegrating relationship around the time Rumours was recorded. They seemed to be challenging each other, and calling up old wounds, yet putting forth the feeling that everything has been reconciled.

The show included a healthy dose of material from that album -- the first three songs, including a fiery The Chain, were all from Rumours -- that came off fresh in spite of more than 35 years of heavy radio play. You got the sense that for Buckingham and Nicks, the songs are just as intensely meaningful as when they were experiencing the feelings that inspired them firsthand. Nicks’ voice may have lost some of the sweetness it had in the ’70s, but if anything, her passion was stronger Tuesday night, and she can still get completely lost in the music as the band vamps through the end of Gold Dust Woman.

But the set list spanned the Buckingham-Nicks era, including four songs from Tusk, an adventurous album that hasn’t become a classic-rock warhorse the way Rumours has (Nicks said that one of the songs, Sisters of the Moon, hadn’t been performed on stage since 1981). It’s hard to hit all the highlights, but Buckingham’s ear-searing, guitar-abusing solo on 1975’s I’m So Afraid, as well as his slowed-down Never Going Back Again and Nicks’ Landslide -- with its lyrics about growing older that have become even more touching as the band and its core audience have aged -- were among the most memorable moments.

Was Christine McVie missed? Yes and no -- she wrote a lot of good songs, but the only one in Tuesday’s show was Don’t Stop, a Fleetwood Mac hit that was a rare instance of someone other than the songwriter doing the bulk of the singing. She was the group’s most straightforward writer, and she balanced out Nicks’ and Buckingham’s eccentricity, which grew in the post- Rumours era. But on Tuesday night, they found their own balance. Purists might complain that the band’s pre-Buckingham-Nicks output was ignored, but these are the parts of the big machine that most of the audience came to see, and the machine worked even better than expected after all the roads it’s traveled down.


Fleetwood Mac was a band known for its in-fighting, relationship struggles and affinity for drugs. Bankruptcy, betrayal, the Betty Ford Clinic, the band was a modern-day Shakespearean tragedy unfolding on stage. Their most popular album, Rumours, which has sold more than 40 million copies since its release in 1977, chronicles the turmoil that would haunt the band for more than two decades.

But on Tuesday night at the American Airlines Center in Dallas, a near sold-out crowd witnessed a true American love story -- the chemistry between Lindsey Buckingham and Stevie Nicks proved that sometimes love does conquer all.

The nearly three-hour set took fans through the band's three-decade catalog from their self-titled 1975 album to their critically acclaimed 2003 album Say You Will. They also played a few songs from their newly released four-track EP Extended Play.

Playing such hits as "Gold Dust Woman," "Dreams" and "The Chain," Fleetwood Mac sounded more aggressive than their soft-rock roots but balanced the harder edge with Nicks' angelic drone. Drummer Mick Fleetwood's powerful beats and bassist John McVie's groovy rhythms provided a backbone to Buckingham's thrash-metal inspired strumming. At one point, as Buckingham's fingers slid across the fretboard, flames literally danced off Rhiannon's fingertips while her ghostly image danced across the universe on a giant screen behind the band.

Rhiannon's spirit wasn't the only metaphysical anomaly appearing on the giant screen. A tribal god with twin bear heads, wings and seven hands transformed and reformed as the band played a few hits from Tusk. Next an image of a full moon piercing a cloudy sky reflected across the waters of a rippling pond. Serenity in motion. Then the eyes appeared. Thousands of them blinking in rapid succession while Rhiannon's face randomly materialized as if she were one of those annoying Where's Waldo puzzles.

Nicks dedicated a song to her "fairy goddaughter" Nicki who recently had a "fairy god, goddaughter." "A lot of people have been very mean to her (the fairy goddaughter)," explained Nicks, "and I've had to watch from afar." When the opening notes to "Landslide" began to play, the crowd erupted and then sang along with the aged singer.
"Gypsy," "Go Your Own Way" and "Never Going Back Again" took me back to the early '90s in Oklahoma when my aunt tried to outrun a tornado in her car with me in the backseat. It was a frightening experience, but somehow Nicks' voice calmed my fear (until my aunt lost control of her car, but that's another story).

One fan was passing a pair of binoculars around and saying, "You can see Lindsey Buckingham's sweat," but I was too busy staring at Nicks, who still looks beautiful at 65.

By the end of the evening, "I love you, Stevie" was the crowd's mantra as the band came back for three encores. Mick Fleetwood was in good spirits and thanked the crowd for their devotion and a fabulous evening, screaming "We're back" as he left the stage.

But Stevie Nicks said it best:

"You guys are dreamcatchers. We write these songs; we throw them out there, and you listen to them, you love them, you live your life to them and you throw them back at us. We sing them to you again, and we throw the back to you. And you listen to these songs as if you've never heard them before. You've been doing that for us for 35 years. We just want you to know that it hasn't gone unnoticed, you guys. We are so grateful to you. We appreciate it every single night that we do this. Thank you so much for that."
Nickslive at Wednesday, June 05, 2013
Share