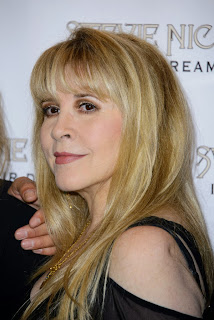 
‘I TOLD the press last year that 2013 was going to be the year of Fleetwood Mac,” comes the nervous confession of Stevie Nicks, the band’s vocalist and songwriter. “I was just hoping with all my heart that this big statement was gonna come true!”

Certainly, the UK hasn’t made a liar out of Nicks who, at the age of 65, is about to embark on a headline trip around the country’s biggest arenas. Nor, in fact, has the rest of the world: the band’s biggest selling album, 1977’s Rumours, found itself nearing the top of several worldwide charts again this year – adding hundreds of thousands more sales to the 40m copies shifted since its release.

Nicks is still a blonde stunner, and it’s hard to believe she’s preparing to celebrate her 40th year with the group in 2014; in that same year, Fleetwood Mac – completed by Mick Fleetwood (drums), John McVie (bass) and Lindsey Buckingham (vocals, guitar) since the departure of Christine “Perfect” McVie in 1998 – will reach the grand age of 47.

They lost years to drugs, in-fighting and line-up changes, but since the Anglo-American blues-rock band dropped to a four-piece they’ve seemed unstoppable, their international live shows grossing millions at the box office. And that’s, in part, because of the longevity of their back catalogue; Albatross, Go Your Own Way and Nicks-penned Dreams and Rhiannon have endured through musical fads and fashions.

Of course, Nicks has helped her prediction of 2013 success along by stalling the band’s return to the live stage. “It’s just smart to keep us out of the spotlight for three years, she says.

“Everyone went along with it. And now they all know it was really a great idea because we were gone long enough that it was us coming back.”

There was, too, the not-so-small matter of Nick’s own solo album – In Your Dreams, her first in a decade and recorded with The Eurythmics’ Dave Stewart – and accompanying documentary which she felt needed her focus. And then there was personal tragedy; Nicks lost her mother and says the experience rocked her to the core.

“And then I got pneumonia. With my pneumonia and my mother’s death I watched the entire first season of Game Of Thrones! That certainly took my mind off everything.”

Nicks is a woman used to resolving her personal problems in public. When her long-term relationship with Buckingham ended, she briefly dated Fleetwood. Love was even in the air with pop legend Prince. “I wanted to work with Prince. And I was smart enough to know that if you start having a relationship with somebody, you’re never gonna work with them; the romantic thing’s gonna take over,” she recalls.

“Prince is such a strange and beautiful guy. But we lived in two different worlds. That’s when I was totally a drug addict and Prince is straight as an arrow.

“He would bring me cough medicine when I was sick and then I’d ask for another spoon of it, and he’d go, ‘I didn’t come here to start you on a new drug!’.”

That wasn’t a battle Nicks wanted either. “You realised that all that recreational/non-addictive [idea] was bull when it started to become more important than music. And it did.

“And heroin’s a lot quicker road to that! It’s gonna become more important than your music, or your acting, or your amazing career that you have ahead of you. You’re just throwing it away.”

It’s not an experience she hopes to repeat – nor could afford to with the demands of her current life.

She has always been a night owl, and although Nicks would be the first to admit that she’ll sit up chatting into the night after the rest of her fellow Fleetwood Mac members have sloped off to bed to beat the jet-lag, she’s putting the reputation of her legendary rock band and award-winning solo career first.

“Honestly, rock bands that are 30 years old would baulk at this schedule and at the amount of songs we’re doing and the length of the show,” she says about the new tour.

“They would go, ‘You are kidding? Two hours and 40 minutes a night?’. When people in Manchester see the show they’re gonna be blown way!”