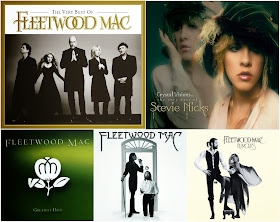 Haven't had a proper update on charts around the world for a number of weeks... Here's the U.S. for both April 12th and April 19th with the most recent countries showing chart action at the bottom.

During the same sales period, Fleetwood Mac had 4 albums on the Top 200 Catalogue Albums Chart all experiencing a bump up the chart with "Greatest Hits" leading the pack at No.33.

"Crystal Visions... The Very Best Of Stevie Nicks" makes an appearance this week on the Catalogue chart, which doesn't happen that often. For chart date April 12, 2014 the album re-entered at No.200 on sales for the week of 1,160 units up 29% over the week prior of 897 units. Based on sales, the album has officially reached GOLD certification in the U.S., but likely surpassed that in albums shipped a while ago.  Total U.S. sales to date since it's release in 2007 = 505,512.

U.S.A. - Chart Date: April 19, 2014
With a full 7 days selling cycle compiled after the announcement of Fleetwood Mac's 2014 tour, the affect on album sales particularly Rumours and The Very Best Of is evident.  These two albums re-enter the Billboard Charts this week - Rumours in at No.187 and The Very Best Of at No.192.  Last week's re-entry title "Great Hits" drops off the chart.  No sales data available at this time.