Those rumours? they were all true
Karate-chopping security guards. Hotel suites painted any colour... so long as it was pink. Secret affairs and simmering feuds. Mick Fleetwood reveals how sex, drugs and Rumours nearly destroyed Fleetwood Mac

When a team of accountants asked me why Fleetwood Mac didn’t make more money on one of our tours, I asked them if they knew how much it cost to find a hotel chain that allowed you to paint suites pink and have pianos waiting for your leading ladies in their rooms across America.

Fleetwood Mac had spent years touring in station wagons, long after we were due for an upgrade, but touring 1977’s Rumours we got a taste and a reputation for travelling in style that has never gone away.

Once we realised we could have a private jet, well, by God, we had one. Our rider became exhaustive: we had 14 black limos at our beck and call. As for those pianos, we’d have to hire a crane to lift them through the window. Later, we had a team of karate experts as our security guards, a full-time Japanese masseuse, our catering was supplied by top-notch California chefs, but usually went uneaten. We had a huge cocaine budget and our own airliner. It was fabulously expensive, wonderful and sometimes depraved.

Looking back on how I carried on, it amazes me I’m still here. I used to find the lunacy romantic, but the thought of those scenarios coming to life again now makes me feel physically ill.

We could afford this excess thanks to the success of our new line-up, which would go on to record multi-million selling albums Tusk and Tango In The Night, and have hits such as Go Your Own Way, Dreams and Little Lies.

From 1975, there were five of us: three English members of the old Fleetwood Mac – me, the ringleader, on drums, John McVie on bass and singer/songwriter Christine McVie, John’s wife, on piano, joined by an American duo – guitarist singer/songwriter Lindsey Buckingham and singer Stevie Nicks. Lindsey and Stevie were very much what Fleetwood Mac was all about: not only were they a band, they were also a couple.

But for all of us there would be a price to pay for working together, living together and loving together. Having completed our first album together in 1975, the five of us embarked on a tour. Although touring is my natural habitat, it has always served to stress the fissures in Fleetwood Mac.

John and Christine had married in 1968 and had worked together since she joined the band in 1970, but years of stress caused by the tumult of the band had done irreparable damage. At some points on that tour, they’d get at each other so fiercely that Chris couldn’t stay in the same room with John. I’d be driven to tears, begging John to stop hurting her and driving her away, but he’d become dismissive. Often it was the drink talking, though at the time he refused to see that.

Also, Chris began a fling with our lighting director, Curry Grant. When we realised and confronted her, she understood that we had to fire Curry, which we did, but John was even more upset, because it was clear to him that Chris really didn’t want Curry to go.

But neither John nor Chris was going to let their personal issues derail the tour. They worked together with much dignity, but not without much pain.

The fissure between Lindsey and Stevie had been there before they joined us, but the pressure of being both in a band and a relationship tore them apart. Previously, Lindsey had been in control of Stevie musically and of their career, but with us she’d become a star in her own right. She now spoke for herself, a change I don’t think Lindsey really liked, and, rather than relying on Lindsey, she had a multi-faceted set of musical partners to work with.

Added to that, my marriage to Jenny Boyd, the mother of my two daughters, was on its way to divorce. Amidst all this, our album reached sales of a million copies and it was time to start work on what would become our most successful record. Making Rumours almost killed us, but not physically. The tales of excess are true, but we’d all be dead already if we weren’t made of stronger stuff. What nearly did us in was the way we handled our emotions.

When we were at the studio, everyone behaved professionally, if a bit chilly towards one another. But again, how could they not be when our songwriters (Lindsey, Stevie and Christine) were writing about their ex-partners (Stevie, Lindsey and John), who were playing and singing on those very songs? And listening to them over and over until we got it all just right? Outbursts usually happened after hours or when we decided to party more than record, all of which derailed things for the day.

That said, others remember it differently. ‘It’s crazy,’ our friend Sandra told Jenny after visiting the studio. ‘Every room I walked into, I’d come across Stevie crying or one of the others deep in a serious conversation. There was always some drama going on.’

Then, on tour, we bought cocaine in bulk and everyone in the band and crew, no matter what their role, would queue up half an hour after the show for the rations.

None of it mattered when Rumours reached No 1 in May 1977. In the end, the album had taken a year to make and just over a million dollars, but all was validated because our album stayed at the top in America for 31 weeks. But the demands of the band stretched my marriage to the limit. To complicate matters further, before we departed to tour Rumours, Stevie and I had begun an affair. It was bound to happen because the two of us are cut from the same cloth, and, unhappy in our private lives, we found solace in each other. It was a crazy love affair.

At first, we’d meet in secret, because I was with Jenny, Stevie had a boyfriend and the rest of the band didn’t know. We’d sneak away, taking long drives through the Hollywood Hills. The clandestine nature of the relationship was romantic, even more so on tour, in our world within a world. After a show in New Zealand, we drove through the night up to a crater to see the sun rise, before spending the whole of the following day in bed together.

Jenny and the girls were living in England, but I wanted my family in California. Jenny agreed on the move, but we would have separate homes.

Once they were in California, though, I knew I had to come clean. When I told her about Stevie, she didn’t understand how I could have neglected to mention it before deciding to move her back. We talked all night, but our marriage was over. Jenny returned to England with the girls.

Then my on-off relationship with Stevie ended, too, because I’d started seeing Sara Recor, not only married, but one of Stevie’s closest friends. Stevie had other boyfriends the entire time we’d been seeing each other but she was very hurt when I told her about Sara.

Touring our next album, Tusk, was the height of excess but, in the end, it wasn’t a good time. More than ever, our musical family was as distant from each other offstage as our music was intimate on stage. That tour nearly killed the band.

And apart from one month in the US in 1982, all five of us never toured together again. Making the album Tango In The Night in 1986-87, Lindsey realised that Stevie and I had not changed when it came to destroying ourselves with substances. Not wanting to be dragged back into the drama that came with Fleetwood Mac, he left the band before the tour began. Then, in 1998, Chris stopped touring, partly because she’d developed an intense fear of flying.

But we’re back. All five of us are touring together. And things are very different now. Recording earlier this year, we’d get up at 7am, exercise and do yoga before going to the studio.

In the spring, just before heading off to start work again with Fleetwood Mac, I had lunch with my mother. She wished me well for the album and the tour. Then, as I got ready to go, she called me back to say one final thing. ‘Now, Mick, you must listen to me,’ she said. ‘This time they’re going to behave themselves, aren’t they?’

CAUGHT SHORT BEFORE BILL
When President Clinton left office in 2001, Fleetwood Mac were asked to play a surprise goingaway party Hillary had planned. 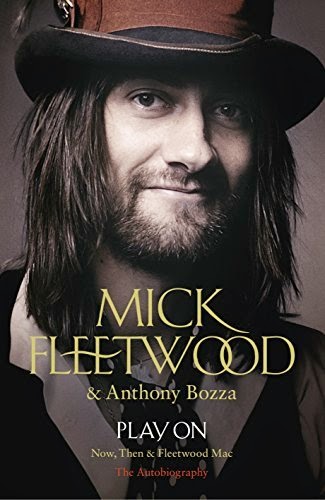 Tents were set up on the White House lawn and we were waiting outside for our surprise entrance when I realised I’d never make it through the set without a pee. Returning to the White House, a few hundred yards away, wasn’t an option and the only toilet was through the audience. But I couldn’t use that as no one was going to miss me, 6ft6in, dressed as on the Rumours cover in a pair of tights and dangling a pair of wooden balls, winding through the crowd.

Carl, my manager, walked up to the nearest guard. ‘Sorry to bother you, but Mr Fleetwood has to pee,’ Carl said. Although it didn’t look like it, the guy was mic’ed. He put his finger to his ear and came back with: ‘Mr Fleetwood is clear to p*** on the White House lawn, sir.’ With that, the guard led me out of the tent and let me do my business, free as a bird.

'Play On, Now, Then and Fleetwood Mac' by Mick Fleetwood is published on October 30th by Hodder.
Nickslive at Sunday, October 05, 2014
Share