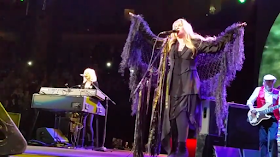 Sunday night proved better late than never for Fleetwood Mac fans, who had been waiting since March 11 to see the legendary band of men and women who have somehow managed to keep their long-running band afloat, despite what the group's guitarist, Lindsey Buckingham, described as their "well-documented ups and downs."

Before the 12,844 fans who came close to packing Verizon Arena in North Little Rock, Fleetwood Mac showed over the course of a 2 1/2-hour show that its members can still rock with the best of anyone, past or present. Postponed on March 11, due to an undisclosed illness of an unidentified member, the "On With the Show Tour" -- arrived in Little Rock, finally, for the 81st and final show in the United States before a break followed by the European leg of the tour.

Though the band had played at Verizon in June 2013 and 15 of the 22 songs they performed Sunday night were also performed at that 2013 show, there was one major difference between the two shows: singer/keyboardist Christine McVie ended her 18 years of retirement and rejoined the band, giving them the lineup that had been responsible for hit after hit.

McVie soared on "You Make Loving Fun," "Say You Love Me," "Little Lies" and especially, "Over My Head" and even played accordion on "Tusk." Stevie Nicks, seeming to be in better condition or spirits than two years ago, served up fine versions of "Rhiannon," "Sisters of the Moon," "Landslide," "Gold Dust Woman," "Gypsy," "Go Your Own Way" and "Never Going Back Again."

McVie, Buckingham and Nicks, who were all wearing black outfits, provided vocals, and drummer Mick Fleetwood and bassist John McVie, though more colorfully attired, provided a firm foundation for the singers.

Buckingham's guitar skills were again on display as he prowled the stage like a feral cat. Indeed, Buckingham, who has a fine voice, could have almost been the show all by himself. Whether he was playing acoustic or electric guitar, Buckingham delivered perhaps the finest display of guitar prowess ever on display in Verizon Arena, and threw in some body language that could have originated in the worlds of athletics or dance.

Fleetwood showed off his drumming skills throughout the show, especially on "World Turning," the first of three encore songs that also included "Don't Stop" and "Silver Springs." The concert was further enhanced by some of the best light show and camera work ever seen in a rock concert this side of Pink Floyd.

Savoring the moment, after the last note, Fleetwood promised that "The Mac is back," perhaps hinting that more new music would someday emerge from the talented songwriting triumvirate of Buckingham, Nicks and Christine McVie.
Nickslive at Tuesday, April 21, 2015
Share