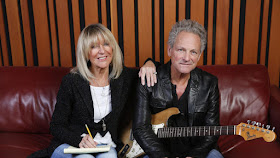 Longtime devotees of the rock band Fleetwood Mac might be forgiven for letting out a gleeful yelp when registering the news that singer-keyboardist Christine McVie shared with The Times in December while sitting next to her band mate -- guitarist, singer and producer Lindsey Buckingham.

“I've been sending Lindsey demos in their very raw form,” she says, sitting in the Village Studio’s storied Studio D in West Los Angeles, “and he's been doing his Lindsey magic on them, which I love.”

The product of that magic is tentatively scheduled to come out in May, and the two are at the Village to work on vocals. Working with them are two familiar names: Mick Fleetwood, whose towering drum kit is in the next room, and bassist John McVie.

The album coming out of these sessions, however, won’t bear the Fleetwood Mac imprimatur.

Rather, the release with the working title “Buckingham McVie” will arrive as the first full-length collaboration between the pair.

For hard-core fans, it’s not news that, save band mate Stevie Nicks, Fleetwood Mac’s members have been holed up at the Village. At various intervals over the past few years, the band has acknowledged working on an unspecified project thought to be a new Fleetwood Mac album.

In fact, during a studio visit in 2014, The Times’ Randy Lewis sat down with Christine McVie and Buckingham to discuss her return to touring after 16 years away from the band.

“I thought, I'm really missing out on something — something that's mine, that I’ve just given up,” she said to Lewis. “I'm not paying respect to my own gift."

Nearly three years later, sharing a couch in the same suite where decades earlier Fleetwood Mac recorded its epic album “Tusk,” Buckingham says that after her return, he and McVie generated an entire album’s worth of material during the sessions.

“We got in here, and it made sense to me with what she had given me and what I done with it. But we still didn't know how it was going to play out in the studio,” Buckingham says.

He quickly realized that he’d had a pent-up enthusiasm for this kind of collaboration. “I loved doing it, because it's something that I haven't had a chance to do for Stevie as much as I did in the past,” he says, stressing that he continues to compose for solo projects.

“Those are a little more esoteric and off to the side,” he says, “but that's not the same as doing it for somebody else.”

McVie says she reconnected with Mick Fleetwood prior to joining the 2014 Fleetwood Mac “On With the Show” tour. She’d been living a solitary life in rural England when the drummer traveled to London in order to escort her to Hawaii, the destination she chose to help her overcome her fear of flying.

“I'd been virtually doing nothing in the country in 16 years of being a retired lady. Being busy walking my dogs — actually not doing anything very constructive,” she says. “I made one little solo album in my garage.” (2004’s “In the Meantime.”)

Buckingham remembers Fleetwood calling him soon thereafter. “He said, Christine's been over here and, you know, she would like to maybe rejoin the band." For Buckingham, it was a no-brainer.

“Yeah, but a lot of things about Fleetwood Mac are unprecedented,” says Buckingham. “I left for a long time and you guys got two guitar players and went ahead and did that for a while. Then I came back.”

“Yeah,” Buckingham agrees. “I mean it's a band like no other.”

McVie, who is best known for writing and singing Mac gems including “Don’t Stop,” “Over My Head” and “Think About Me,” acknowledges that, early on in the Buckingham-McVie project, she doubted her ability to reconnect with her muse.

“I suppose I wondered if I believed in myself,” she says. “But I was like, 'Go for it, Chris. Go for it.' And, you know, a better thing's never happened to me. I've reconnected with the band and found a fantastic person to write with.”

Looking at Buckingham, she adds, “We've always written well together, Lindsey and I, and this has just spiraled into something really amazing that we've done between us.”

For his part, Buckingham’s initial songwriting contributions were the product of sessions with Fleetwood and John McVie, which Buckingham invited Christine McVie to augment.

“It was just pieces with no wording,” she says. “ so I put melody and lyrics on some of his material.”

“That was a first,” says Buckingham. “She would write lyrics and maybe paraphrase the melody — and come up with something far better than what I would have done if I'd taken it down the road myself.”

Those up on the history of Fleetwood Mac might note in the Buckingham McVie moniker the echo of an earlier duet album, “Buckingham Nicks.” Released in 1973 by the two future Fleetwood Mac members when they were a romantic and musical partnership, the Nicks and Buckingham release led Fleetwood a year later to invite the couple to join his band.

Nicks hasn’t contributed to the forthcoming Buckingham McVie project. She’s been on her own trip. In 2016, Nicks embarked on her “Rockin’ 24 Karat Gold Tour” with the Pretenders as openers. That tour will continue with a few dozen more dates across early 2017.

Her schedule, however, had little bearing on what Buckingham and McVie were creating, says Buckingham.

“All these years we've had this rapport, but we'd never really thought about doing a duet album before,” Buckingham says. “There is that album that I did with Stevie back before we joined the band, but other than that, it's all been Fleetwood Mac or solo.”

Interrupting with a tone of bafflement, McVie says, “And why on Earth? It seems absurd after 45 years.”

“Sometimes,” Buckingham says, “it takes, oh, about 40 years of perspective to figure it out.” 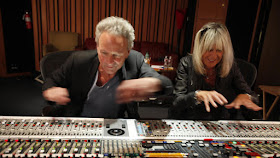