Stevie Nicks Empowers Through Her Songs 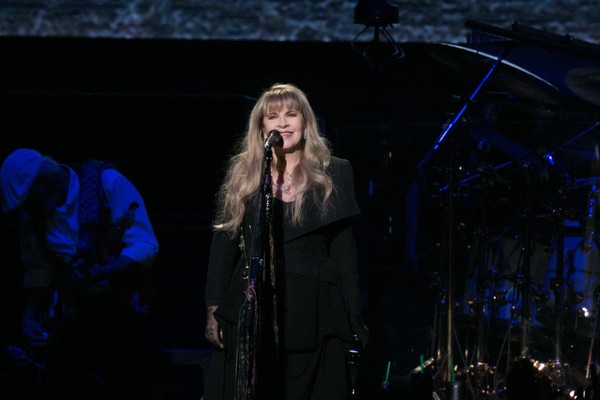 CLEVELAND, Ohio -- The story goes, on a hot summer day in 1970, Janis Joplin shouted off the opening band when its set ran long. Stevie Nicks, that band's diminutive singer would later comment,"Being yelled off the stage by Janis Joplin was one of the greatest honors of my life."

Both women would go on to beat the rock odds and be inducted to the Rock and Roll Hall of Fame, just 14 percent women. When this year's inductees are announced in December, Nicks could become the first woman to be inducted into the Hall twice -- once as a member of Fleetwood Mac, and once as a solo artist.

Joplin and Nicks' stage personas, so indelible, were built on opposite characteristics. On stage Joplin swaggered, overpowered. Along with her aversion to sharing a stage, she rarely shared a microphone. Her string of backup bands was an interchangeable not-as-important. It was always Janis Joplin and a forgettable else.

Nicks found fame in the five-member Fleetwood Mac, whose soap opera backstories became the stuff of rock legend. On stage, she twirled and harmonized. Her songs about gypsies and witches shared space with songs by her guitar-picking ex-lover Lindsey Buckingham, who was also her songs' arranger. At concerts she became ethereal, the feminine yin to his masculine yang.

Critics responded in an odd sort of way. Nicks penned "Dreams," the band's only No. 1 hit, as well as half of Rolling Stone's selections for Fleetwood Mac's top 14 songs and seven of the ten fan-favorites in a Rolling Stone poll. Yet Nicks was routinely critically dismissed as a "ditz," a "bimbo," and a "mooncalf" -- while Buckingham was hailed as the band's creative genius.

Which begs the question: Why was it either/or?

Commenting on critics' tendencies to overvalue Buckingham while dismissing Nicks, writer Amy Mulvihill suggested, "I wish these people would actually listen to her songs."

Early Nicks' lyrics gave a twist to a familiar subject -- the demise of a relationship. In Nicks' songs there is no crying at a party, offering another piece of her heart, or worrying that you'll love her tomorrow.

Instead, she offers new options, from the flippant, "Well who am I to bring you down?" to the caustic, "Rulers make bad lovers, better put your kingdom up for sale."

She ruminates, but it never leads to despair. It's just a learning moment, an important step on the road to something else. It was an empowering shift of perspective, done with the lift of a shawl by a perfectly manicured hand.

"Stevie took traditionally feminine characteristics, unabashedly embraced them, and then made them the source of power," songwriter and singer Vanessa Carlton commented.

It's probably no surprise her life mirrors the lyrics. Still performing at 70, her picked-apart love affairs, critic dismissals, addictions and weight ups and downs, never stopped a career that now spans almost 50 years, and includes eight Grammy nominations for her solo work, 28 years of a reverential fan-fest called, "The Night of a Thousand Stevies," and a continued relevance best expressed in a 2014 millennial TED talk that advised a new generation of fans to "just be Stevie."

There is a temptation to call it ironic -- the fact that this diminutive woman draped in shawls and lace could end up so triumphant -- but ironic  would embarrassingly miss the point.

Just listen to her songs.
Nickslive at Thursday, November 15, 2018
Share