Lindsey Buckingham has kept a low profile since he was sidelined by emergency heart surgery in February 2019, but he re-emerged on Friday for a four-song acoustic set via Zoom for the tech company Nutanix.

Buckingham played the Fleetwood Mac songs “Never Going Back Again” and “Big Love,” along with his solo cuts “Trouble” and “Shut Us Down,” marking the first time he’s sung in public since the operation.

“This [pandemic] has been like a couple of years previous in which things occurred that I did not see coming,” he said. “One was my split from Fleetwood Mac. Another one was having a bypass operation, which I did not expect to happen. You could say that this makes it a trifecta of events that were completely off the charts.”

Buckingham’s vocal cords were damaged during the bypass operation. “While it is unclear if the damage is permanent, we are hopeful it is not,” Buckingham’s wife Kristen said in a statement at the time.

His first post-surgery appearance took place at his daughter’s high school graduation ceremony where he played “Landslide,” but the students handled all the vocals. He also announced a solo tour in February 2020 for April and May but had to cancel due to the pandemic.

“There are things that are going to happen that you cannot control,” Buckingham says. “There certainly is a lesson in acceptance there, but there’s also a lesson in looking for what is really essential within those circumstances. Yes, I’ve got my talent and my artistic process that I value greatly…Beyond that, I’m here every day with my wife and my children and that is the gift that is essential to all of this. That becomes the silver lining. You are gently, or not-so-gently, reminded of essentials.”

Near the end of the broadcast, Buckingham gave an update on his solo record. “I do have an album coming out,” he said. “We’re waiting to see where this is all going. We don’t have a release date. I was meant to be out on the road now promoting it. It should be out in the spring sometime. It’s just self-titled: Lindsey Buckingham. We’ll see where that goes.” 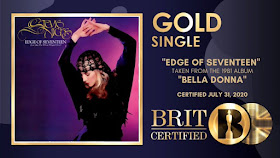