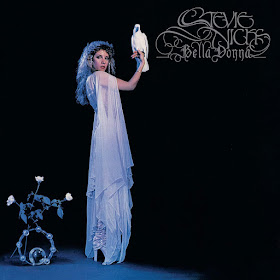 The rock-and-roll icon talks about style, spirits, and writing one of her best songs ever.

I first met Stevie Nicks in 2013, when I was about to turn seventeen. At the time, I was editing Rookie, an online magazine for teen girls, and I had recently given a tedxTeen talk critiquing a trend of superficially “strong” female characters in pop culture. I am sure the video would embarrass me now, but I stand by its concluding line: “Just be Stevie Nicks.” A few months later, I heard from Nicks’s management team. Her cousin had sent her the video of my talk, and she wanted to invite me to a Fleetwood Mac show. At the concert, in Chicago, I bawled listening to Nicks sing her otherworldly songs, and was stunned when I heard the same voice dedicating her performance of “Landslide” to me. Backstage, Nicks gave me a gold moon-shaped necklace—a token she grants to those she’s taken under her wing. We kept up a friendship, and, in 2017, I interviewed her for Rookie’s podcast. Then the show’s production company shut down midseason, and the conversation never aired.n company shut down midseason, and the conversation never aired.

In the years since, Nicks’s appeal among younger generations has only grown. On TikTok, her songs provide a soundtrack to viral videos and fans pay tribute to her witchy aesthetic. Artists such as Harry Styles, Miley Cyrus, and Lana Del Rey have asked her to lend her voice to their songs, and she’s become “fairy godmother” to a wide circle of younger artists. For listeners, too, she has always acted as a kind of spiritual guide. In her music, loss is simultaneously earth-shattering and ordinary. Heartbreak is survivable, and possibly a key to self-knowledge. Many of her songs take place at night, in dreams or visions, “somewhere out in the back of your mind.” Her narrator frequently asks questions of herself and of some higher power, as if in constant conversation with her own intuition. When I said “Just be Stevie Nicks,” I was thinking of how her work had taught me to see such sensitivity as a source of strength. Nicks’s music is what you listen to when you need help listening to yourself.

Over two evenings last month, Nicks and I caught up over the phone. She was at her home in Santa Monica, where she has spent the pandemic keeping nocturnal hours and working on a TV series based on the Welsh myth of Rhiannon. When she apologized for asking to speak at 10:30 p.m. E.T., I assured her that I was on a similar schedule. “Good,” she said. “Then we are definitely friends of the night.” This interview has been adapted from our unpublished early conversation and our recent ones.