4 more dates added to the list of shows for 2022. All in June.  More dates to come. I suspect July and August dates will follow and likely on the east coast since Stevie is touring into September.

Check out Stevie's official website for the links to buy. 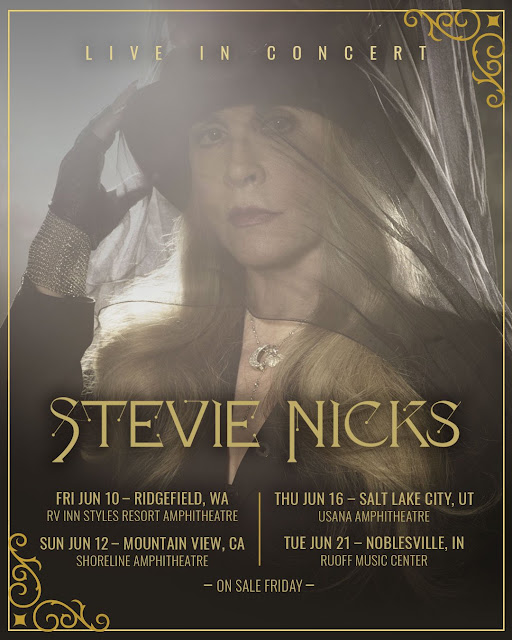 First Ever Compilation From Rock & Roll Hall Of Famer Highlights Songs From Her Solo Career, Newly Remastered By Glyn Johns, Along With Two Unreleased Studio Recordings

Christine McVie was not only the songwriter and vocalist for many of Fleetwood Mac’s biggest hits (“Don’t Stop,” “Everywhere,” and “Little Lies”), but she also released some stunning solo albums during her Rock & Roll Hall Of Fame career. Rhino puts those recordings center stage on the very first compilation to spotlight McVie as solo artist.

SONGBIRD features songs that were remastered by legendary producer Glyn Johns, who worked closely with McVie on the project. It includes a selection of songs from two of her solo albums – 1984’s CHRISTINE MCVIE and 2004’s IN THE MEANTIME – plus two previously unreleased studio recordings including “Slowdown,” which was originally written for the 1985 film American Flyers.

Another song that has never been released is “All You Gotta Do,” a duet that Christine recorded with George Hawkins while making IN THE MEANTIME. The track was never finished and Johns added Ricky Peterson on Hammond and Ethan Johns on drums and guitar.

Another unreleased song is a new orchestral version of "Songbird" from Fleetwood Mac’s RUMOURS album, which has become one of McVie’s signature tracks. The new version pairs McVie’s iconic vocals from the original recording with a gorgeous new string arrangement by six-time Grammy Award winning composer and arranger Vince Mendoza.

SONGBIRD goes back to 1984 for a selection of tracks from Christine McVie, which find McVie joined by several legendary musicians. “The Challenge” includes backing vocals by her Fleetwood Mac bandmate Lindsey Buckingham and lead guitar by Eric Clapton. “Ask Anybody” is a song McVie co-wrote with Steve Winwood, who also adds backing vocals and piano to the track.

Most of SONGBIRD is taken from 2004’s IN THE MEANTIME. Highlights include the Top 40 AC hit, “Friend” and “Sweet Revenge,” one of several songs on the record that she co-wrote with her nephew Dan Perfect, who also helped produce the album.

The liner notes that accompany SONGBIRD find McVie paired with acclaimed English radio DJ and broadcaster Johnnie Walker for a conversation that touches on every song from the collection.

PRE-ORDER AT AMAZON OR AT RHINO.COM

Christine Album debuted in the UK on two charts, missing the main Top 100 Albums Chart, instead landing on the following charts:

The album also debuted at #15 in Scotland.

In the US, the album missed the Billboard Top 200 but did impact these two charts: 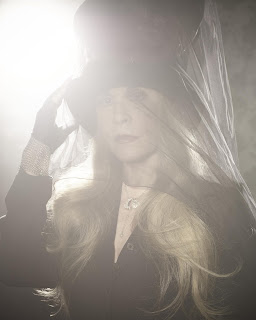 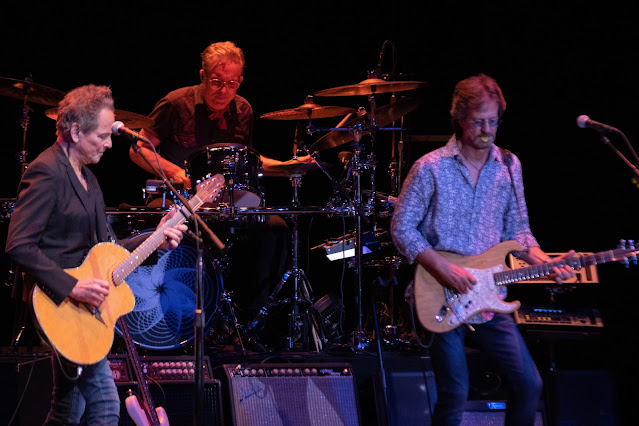 By Josef Woodard
Tue Apr 19, 2022
Santa Barbara Independent
PHOTOS
What makes Lindsey Buckingham such a unique figure in pop history, even verging on the oft-misused superlative of “pop genius”? His generous and career-spanning concert at the Lobero on Friday, April 15, offered many clues. From early Fleetwood Mac hits “Go Your Own Way” and “Tusk” — highlights of this concert — up through last year’s impressive, eponymous solo album, Buckingham has deftly juggled hooks, polish, and also quirks. When he musters up grit in his vocal tone or takes off on distortion-laden guitar flights, we rarely get the sense that he’s baring his soul or channeling rock and roll angst; pop craft and artistic control trump sheer abandon.
Part of a run of smaller venue dates before heading to much larger venues in Europe, Buckingham’s Lobero concert also came equipped with extra layers of emotional underscoring. This was an eagerly awaited, pandemic-delayed tour. Additionally, since his 2018 Arlington concert with Christine McVie, Buckingham has been dismissed from Fleetwood Mac and endured emergency heart surgery and a near-divorce.
But at the Lobero, the lean and lithe Buckingham, now 72, delivered a powerful — and polished — show with his most excellent quartet. He tapped into his small but high-quality solo discography, firing up “Trouble,” “Soul Drifter,” and the new “I Don’t Mind” (a prime example of his artful way with a pop hook). Though mostly playing his delay-lathered acoustic-electric guitars, Buckingham took the occasion of the tune “I’m So Afraid” to lay out one of his tasteful, climactic, and epic electric solos towards the show’s end.
The concert also had two pivotal moments of particular poignancy. One came with his closing tune, the new “Time,” a lovely variation on the theme of Sandy Dennis’s mortality-wise anthem “Who Knows Where the Time Goes?” The other moving moment came with his slowed-down and radically reinvented version of the Mac tune “Never Going Back Again.” Suddenly, Buckingham seemed to pull away from the craft factor and bare his soul for a few minutes. A mid-show standing ovation was in order.
Nickslive at Tuesday, April 19, 2022 No comments:
Share 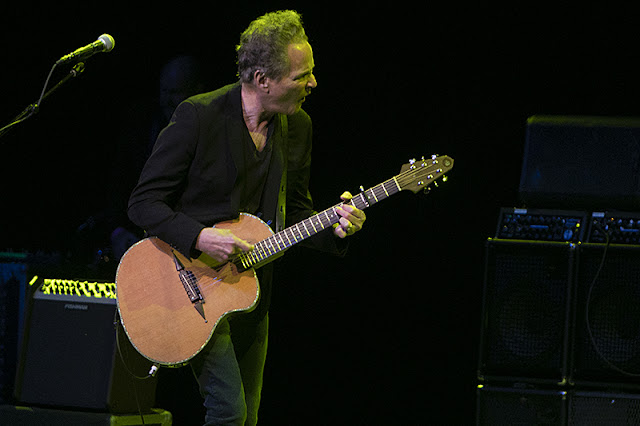 Lindsey Buckingham
Palace of Fine Arts
April 5, 2022
Photo/Review by Raymond Ahner
SFSonic
Earlier last year Lindsey Buckingham announced not only the release of his first solo album since 2011, (and his first album following his departure from Fleetwood Mac) but also a North American tour. The current leg of the tour recently kicked off at The Palace of Fine Arts in San Francisco, where he performed a nearly two-hour set to a packed house.
Taking the stage with his band at precisely 7:55pm, Lindsey first addressed the crowd and apologized for the absence of keyboard player Brent Tuggle, who was ill. He then kicked off the evening with “Not Too Late,” from his 2006 solo record Under the Skin. Lindsey was as masterful on his guitars as ever, as he and his three-piece band did a few more from his solo albums, including “Soul Drifter” and “Doing What I Can,” both from his 1992 record Out of the Cradle.
As the evening progressed, Lindsey played a few songs solo, including Fleetwood Mac classics “Never Going Back Again,” and “Big Love.” His backing band was not done yet though, as they returned to play a few songs from Lindsey’s long awaited seventh and latest solo album. Highlights included “Scream,” “I Don’t Mind,” and “Swan Song,” all which showed not only Lindsey’s talent, but also the talent of the band supporting him. They also tore through Fleetwood Mac standards “I’m So Afraid,” (with an epic extended solo from Lindsey and the song that everyone in the crowd wanted to hear, “Go Your Own Way,” during which Lindsey took center stage to belt out another incredible solo to close out the set.
After a brief break Lindsey and the band returned to the stage, thanking them and stating that they were “Everything you want in a hometown crowd. He then introduced his band members (Neale Heywood on guitar, Michael Urbano on drums, and Michael Kiyoka on keyboards. The band then ended the evening with “Love Is Here To Stay” and “Time.” By the time it was all said and done, Lindsey showed that even as a solo artist he is an incredible musician, and he doesn’t appear to even be close to stopping anytime soon.
Nickslive at Tuesday, April 19, 2022 No comments:
Share 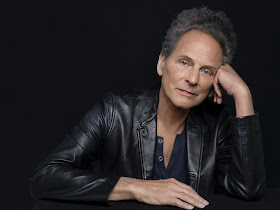 Over the past four years, Fleetwood Mac gave him the boot, his wife filed for divorce, he lost his voice, nearly died, and watched the release of his long-awaited solo album get delayed several times. Oh, and then there was the whole pandemic thing.

“It’s certainly been an interesting few years, starting with the whole Fleetwood Mac fiasco,” Buckingham, 72, told The Chronicle, calling from his home in the Brentwood neighborhood of Los Angeles.

Yet the songwriter, best known as the band’s lead guitarist and singer on the 40 million-selling 1977 album “Rumours,” is full of hope as he prepares to kick off an extensive spring solo tour at the Palace of Fine Arts in San Francisco on Tuesday, April 5.

The trek is in support of his seventh solo album, “Lindsey Buckingham,” which was completed nearly five years ago and finally released in September. The first leg of the tour in the fall saw him packing theaters with loyal fans, and many of his upcoming dates are sold out too.

But Buckingham is most looking forward to getting back onstage with the members of his former group — drummer Mick Fleetwood, bassist John McVie, keyboardist-vocalist Christine McVie and singer Stevie Nicks, who reportedly issued the ultimatum forcing the band to dump Buckingham ahead of its 2018  “An Evening With Fleetwood Mac” tour.

“These are people that were my family, dysfunctional or not, for close to 45 years,” Buckingham said.

The Palo Alto native joined Fleetwood Mac with then-girlfriend Nicks in 1974, after the pair graduated from high school in Atherton. They quickly became the identifiable faces and voices for the former British blues band, with Buckingham contributing hits like “Go Your Own Way,” “Tusk” and “The Chain.”

On the band’s recent tour, his position was jointly filled by Neil Finn of Crowded House and Mike Campbell of Tom Petty’s Heartbreakers, which Buckingham said made it feel like “a cover band.”

“It didn’t dignify the legacy that the five of us had built,” he said.