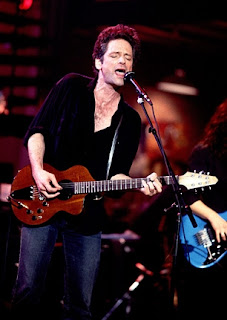 
Lindsey Buckingham might be described as the mad scientist of California pop. The singer, songwriter and guitarist who masterminded the gossamer folk-rock harmonies of Fleetwood Mac's biggest hits is a notorious perfectionist in the recording studio. And at Town Hall on Wednesday evening, in a concert that was part of his first solo tour, he worked with considerable success to recreate the layered textures that have made both his Fleetwood Mac and his solo albums models of a certain kind of meticulous craft.

Especially on his solo albums, Mr. Buckingham has applied his wizardry to the creation of tortured psychodramas in which every sigh of pleasure is balanced by a primal scream or a Gothic nightmare. His newest record, "Out of the Cradle," is an autobiographical song cycle describing a midlife crisis with many characteristics of a nervous breakdown.

In introducing songs from the album on Wednesday, the wiry, frizzy-haired singer talked about their personal associations. A brooding acoustic version of Rodgers and Hammerstein's "This Nearly Was Mine," which he said was his father's favorite song, prefaced "Street of Dreams," a reflection in which a visit to his father's grave sets off howls of loneliness and despair.

Since Mr. Buckingham plays most of the instruments and sings most of the parts on his own recordings, even to begin duplicating what he does by himself in the studio required a nine-member band. He was joined by four guitarists doubling as backup singers, a drummer, a keyboardist, a bassist and two percussionists.

Even though the sound had an impressive clarity, there was something bizarre about finding the stage of Town Hall jampacked with tons of electronic equipment that dwarfed the performers. This sort of technological barrage befits a heavy-metal concert in which the goal is to create a sonic explosion. But it seemed excessive for an artist as quirky and introspective as Mr. Buckingham.

Pumped up to heavy metal levels, such Fleetwood Mac songs as "Go Your Own Way," "The Chain" and "Tusk" sounded overblown, although they had an undeniable visceral clout. When things quieted down, as in "Street of Dreams" and "All My Sorrows" (Mr. Buckingham's freewheeling adaptation of "All My Trials"), the layered voice, guitar and percussion found a blend that was almost as refined as the texture of the recording.