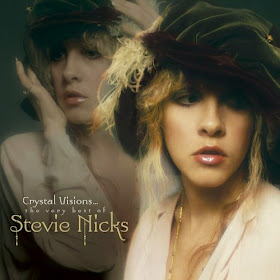 Stevie released "CRYSTAL VISIONS…THE VERY BEST OF STEVIE NICKS" on March 27, 2007 on Reprise Records. "CRYSTAL VISIONS" is a collection of songs from her three decade career as a solo artist and member of the legendary Fleetwood Mac.

Released in two configurations a stand alone CD and a CD/DVD Version.  The DVD component of "CRYSTAL VISIONS" offers 13 Stevie videos with voice-over commentary by Nicks.  Also included on the DVD is a never before seen Stevie Nicks home video which was filmed during the making of the five-times platinum "BELLA DONNA" album.

One bonus track was offered on the digital version purchased via iTunes; a live version of "Stand Back" recorded in Las Vegas.

Reprise Records initially released two radio only promos, the live version of "Landslide" with the Melbourne

Symphony Orchestra and "Rock and Roll". Both tracks failed to garner much airplay and made no impact on the charts. Reprise Records released "Stand Back" (issued with club mixes) on May 29, 2007. "Stand Back", which peaked at #5 on the pop singles chart in 1983, reached #2 on the Billboard Club chart. Nicks previously reached #1 on this chart, with "Planets of the Universe" (from Trouble in Shangri-La) in 2001. The remix single of "Stand Back" debuted on the Billboard Hot Singles Sales chart on September 15, 2007 at #10, peaking at #4 the following week. It also debuted on the Billboard Hot Dance Singles Sales chart at #3, later peaking at #1.

CRYSTAL VISIONS debuted April 14, 2007 at No.21 on Billboards Top 200 Albums Chart and spent a total of 12 weeks on the chart. The CD/DVD version debuted at No.2 on the Top Music Video Sales Chart  spending 14 weeks on the chart and also at No.2 on the Top Internet Albums Chart.  To date Crystal Visions has sold in excess of 500,000 copies in the U.S.. It has not been certified by the RIAA.
Nickslive at Tuesday, March 27, 2007
Share