Nicks, Isaak: Who's the soft-rock champ? 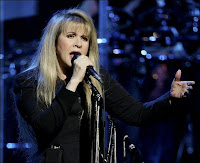 Clearly, Stevie Nicks and Chris Isaak are at the very least on good terms. It's quite possible they're good buds. They definitely don't hate each other, since they're playing a show together tonight at the Tweeter Center in Camden, N.J.

Even still, we feel like it'd be amusing to pit the two soft-rock titans against each other in a Caribbean Barbed Wire Lumberjack Steel Cage Death Match, just to see who is the true champion of soft rock radio.
Plus, there's not much to write about this week, so here goes.
•Songwriting chops. Edge: Nicks, by a mile. After Stevie moved outside the Fleetwood Mac fold, everyone wondered what she could do without Lindsey Buckingham or Christine McVie there to help as a foil, co-songwriter or musical collaborator. The answer was "Stand Back," "Talk to Me," the classic "Leather and Lace" -- which is a killer cut despite the presence of Don Henley -- not to mention "Stop Draggin' My Heart Around," which she didn't write but made awesome by blending her scratchy vocals with Tom Petty's Florida-flavored faux-Dylan lead vocal. Isaak has, er, "Wicked Game."
•Vocal chops. Edge: Draw. If you go for pure pleasantness of voice, Isaak would be the clear winner. His Elvis-meets-Roy Orbison croon and sneer could make almost any tune a hit. But Nicks' now-weathered pipes still burst with personality, and like Jules Winnfield said in "Pulp Fiction," personality goes a long way.
•Previous band. Edge: Uh, Nicks. Isaak was in a rockabilly band called Silvertone in the mid-1980s.
•Versatility. Edge: Isaak. In addition to being a great singer and decent songwriter, the studly Isaak has appeared in several films, including a brief appearance as a cop who gets duped by Hannibal Lecter in "The Silence of the Lambs." Aside from her soap opera-esque moments in Fleetwood Mac footage, Nicks doesn't act.
•Onstage accessories. Edge: Isaak. He brings the sneer and the greaser-style hairdo, but Isaak isn't really a props kind of guy. Nicks loses here for those weird cape/curtain-type things she hangs from her arms to cover herself up. Why? You go girl.
Although it looks close on paper, Nicks slaughtered the California boy.
Nicks and Isaak will be at the center at 8. Tickets are $25, $45, $79.75 and $125 at www. ticketmaster.com.
Nickslive at Friday, June 15, 2007
Share