Nicks steps onstage and back in time on new tour 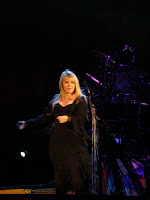 Some stars reflect on past mistakes and claim they wouldn’t change a thing. Not Stevie Nicks.

The rock goddess, who plays the Tweeter Center tomorrow with Chris Isaak, may weave layers of ambiguity through her songs, but she’s straightforward about her desire to erase almost two decades of drug abuse.

Nicks battled a cocaine habit from 1977 to 1986, and almost immediately after, an eight-year addiction to the tranquilizer Klonopin. “I would absolutely do it differently,” Nicks said from a tour stop in New York City. “Cocaine almost ruined my life. And if I hadn’t done Klonopin, I would have made two or three more fantastic albums. I lost most of my 40s to Klonopin and that really makes me mad, because your 40s are great. Maybe that’s why I see through 40-year-old eyes, because I lost my 40s, so I’m trying to get a little of my 40s.

If Nicks is making up for lost time, she’s doing it in style. For her Crystal Visions Tour, the singer/songwriter has a girly new wardrobe that helps her slip into the persona of an ageless rock star even as she creeps toward 60.

“I think you really can feel the age that you want to be depending on where you are, what clothes you’re wearing, what boots you’re wearing, how your hair is. You can really keep yourself in a very youthful place if you want to. And I don’t really want to be 59. I want to be like 40, so I look at my life through 40-year-old eyes when it comes to going on the stage.”

Though the Mac roared back with 2003’s “Say You Will,” the groups future hangs in the balance with the departure of keyboardist/singer Christine McVie.

“I was very not inspired by not having Christine on the last tour,” Nicks said. “I miss her more than you could imagine, more than I could have even imagined. So I hope that one of these days, Christine’s going to get up in her English castle and say, ‘I’m bored. I’m going to call Stevie and I’m going to do this Fleetwood Mac thing one more time.’ Because I don’t know if I’ll be happy doing it again without her. It just doesn’t seem right to me.

While another solo album is also a possibility, Nicks is also interested in turning the Welsh mythological stories of Rhiannon into a movie, and making a cartoon out of a story she wrote at age 17 - “So that was like 100 years ago,” she said.

But while Nicks pokes fun at her age and escapes into a younger version of herself onstage, she also embraces growing older.

“In my real life I’m very much aware that I’m 59, because my life’s experience is based on 59 years,” she said. “And that part I really like, because I feel like I’m very wise now. I see mistakes coming and I avoid them. When I was 40, I didnt.”
Nickslive at Saturday, June 16, 2007
Share