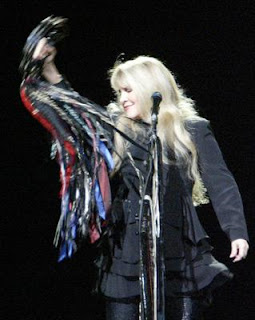 Front and center amid her seven musicians and three backup vocalists, the woman who put much of the mystery into Fleetwood Mac belted out the hits like a true rock star.

One year removed from her 60th birthday, Nicks looked and sounded much like the energetic star who delivered to America a long line of hits, from the Buckingham Nicks start of 1971 to the full-blown Fleetwood Mac days to the solo career that bloomed because the three or four songs per album she was allowed to contribute to "The Mac," as she called them, weren't enough to satisfy her songwriting talents.

She told the just-about-capacity crowd just that early on during the concert. Nicks would be in a chatty mood, she explained, because she wanted to talk about all those great songs of hers.

From the first song of the night, "Stand Back," it was obvious that Nicks' pure, soaring rock voice still sizzles. It was vintage Nicks, dressed mostly in black, numerous strands of beads draped from her microphone stand, body ready to twirl with arms extended as if she really believed a wind beneath the balloon sleeves of her outfit could carry her off into the clouds. 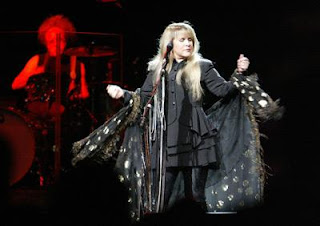 Her band, led by her longtime friend and music director Waddy Wachtel on a very demonstrative guitar, was forever ready to help Nicks drive home the point with equal parts melody and power.

"In 1981, going solo from the Mac was a very dangerous thing to do," she said. "I didn't want to split up the band, but I needed a vehicle to do more than three or four songs a record as a songwriter. So we put out the album 'Belladonna.' " The rest, she declared, was made rock 'n' roll history.

"I'd like to thank you from the bottom of my heart for staying with me all these years," Nicks said, fanning her eyes as if to dry tears. "And, with that said: Let's rock."

So rock they did, mixing pretty pieces like "Enchanted" with bona fide monster hits like "If Anyone Falls" and "Rhiannon."

Before launching into the gorgeous and piping hot "Dreams," Nicks described how she wrote the song while lying on Sly Stone's black velvet bed. "I took in the greatness of Sly," she declared. "I played it for the Mac, and we recorded it that day." With that classic line, "Thunder only happens when it's raining . . .," who wouldn't have? 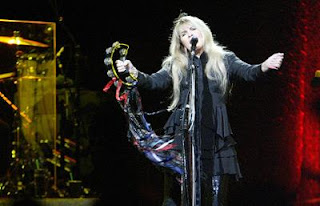 Nicks revealed how she and guitar partner Lindsey Buckingham wrote "Sorcery" in the time when they felt lost because the Buckingham Nicks album was out of the stores and bust after only three months.

The night kept reaching new peaks, with "Gold Dust Woman" leading into Tom Petty's "I Need to Know" and the Mac classic "Landslide." "I want you to interpret my songs," Nicks said. "But the last two years, I talked a little bit about what this one means." With the numerous photos of her parents and Nicks growing up from a child to a star performer, it was obvious that her message of "putting aside ego for family" means something important to her. "I'm getting older, too," she sang, as her life shone for all on the big screen backdrop.

She demonstrated she's definitely not too old to rock hard with her rollicking cover of Led Zeppelin's rowdy "Rock and Roll" for the first encore.

For the second, she chose her theatrical "Beauty and the Beast," lighted by a candelabra on the piano and complete with a black-and-white film production to match the story on the screen.

Nicks wasn't ready to go without one more statement. She told all that the music industry is in trouble. "So go to concerts, listen to the radio, do whatever you can for new music. Or else we'll be listening to the same classic rock for the next 20 years," she said.

Mark Bialczak can be reached at mbialczak@syracuse.com or 470-2175. His blog "Listen Up" is at http://blog.syracuse.com/listenup/.
Nickslive at Wednesday, June 27, 2007
Share