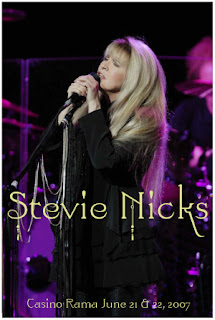 RAMA, Ont. -- Stevie Nicks was down, but not out, on Thursday night as she opened the first of two soldout solo shows at Casino Rama. .

The 59-year-old songbird and sometime Fleetwood Mac member fell down on stage toward the end of her hour-and 45-minute performance during an extended and lively version of her signature solo track, Edge of Seventeen. Nicks, who said backstage later that she had a bum knee that was now extremely swollen, was helped to her feet by one of her three female backup singers and none of her seven male band members, who seemed oblivious to her plight. Ever the trouper, the singer -- who still favours platform suede boots -- shook it off, laughing, and strongly finished the tune, and even came back for a two-song encore including a cover of Led Zeppelin's Rock And Roll.

Touring in support of a greatest-hits album, Crystal Visions, Nicks claimed she loved to come to Canada because everyone was so nice. "As much as I love my country, they aren't that nice," the Phoenix native said.

The theatrical singer, who loves flowing dresses, velvet coats and top hats, shawls, black leather clothes, and the aforementioned boots (and made about a half-dozen costume changes) had a mic stand dripping in necklaces and scarves, and never missed a moment to interpretive dance or twirl on the spot.

In response, the audience rushed the stage from the moment Nicks opened her show with crowd favourite Stand Back, followed later by some Fleetwood Mac gems as Rhiannon, Dreams and Gold Dust Woman, the latter one of the set highlights as she really let it rip vocally.

Unlike many of her contemporaries, Nicks astonishingly sounds exactly as she did almost 40 years ago when she was starting out. But it was the poignant Landslide, the song from the 1973 landmark Buckingham Nicks album, that put a lump in everyone's throat -- as she sang in front of a backdrop of images of her family, most prominently her elderly and fragile father.

This is a performer who wears her heart on her sleeve, and we love her for it.

Nicks' last song was her own Beauty and the Beast, another tearjerker as a black-and-white film acting out the tragic fairytale played behind her on a large backdrop.

The singer, who also made a point of shaking the hands of most of the fans gathered at the front of the stage, wound down the evening with a last-minute plea for the music industry, which she pointed out was in "a sad state."

"Go to concerts, buy albums, listen to the radio," she pleaded as she took her final bows with her entire band.
Nickslive at Saturday, June 23, 2007
Share