Stevie at The Roxy July 24th

Stevie Nicks, dueting with singer Vanessa Carlton on a song, "The One," from Carlton's forthcoming album Heroes and Thieves (to be released October 9th) during a showcase at the Roxy in Los Angeles July 24th. The former Fleetwood Mac singer was a little tentative about her part, telling the crowd, "I just learned the words to this song this week, so sorry if I mess it up." Still, the duet went off without a hitch, and Nicks then found a seat in a VIP booth where she watched the rest of Carlton's set. Nicks has always been a Carlton supporter, taking her out on the road with her as her supporting act this summer and also in 2006. 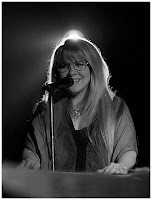