Shopkeeper and Stevie Nicks own horse 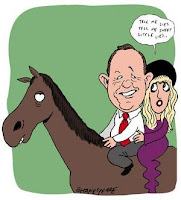 Sydney Morning Herald - Sydney,New South Wales,Australia
Michael Evans owned a horse once. It had wheels at one end and a tail of hemp.
THERE'S no obvious link when you ponder a list of names including Myer baron Bill Wavish, Fleetwood Mac singer Stevie Nicks, pub owner Bruce Mathieson and music promoter Andrew McManus.
But add Gai Waterhouse and you start to get an idea there might be a neddy involved.
Sure enough, shortly before 10 am today, an upcoming three-year-old called Illume will prance around Randwick in a practice run for horses still on training wheels.
That odd collection of names are, in fact, the horse's owners.
The story goes that chums Wavish and Mathieson invested in the horse with Waterhouse.
But some time after Nicks, the chanteuse, was brought by McManus for the 2005 Melbourne Cup, Waterhouse apparently sold her stake to the American singer, with another stake going to Gai's mum.
Waterhouse still trains the gee-gee, named after a Nicks song.
Whispers around the track suggest one name tossed around for the horse was Illegal Substance although we can't imagine such a link to a wholesome band such as Fleetwood Mac.
Horsey officials apparently thought the name inappropriate and ruled it out.
Nevertheless, we're just happy it wasn't named after another Fleetwood Mac song, Little Lies .
Wavish wouldn't be too keen on Nicks wowing him with the chorus: "Tell me lies, tell me sweet little lies."
Nickslive at Thursday, August 09, 2007
Share