Stevie Nicks "STAND BACK THE REMIXES"

Only 1,000 copies available worldwide! To purchase a limited pressing of Stevie's "Stand Back" Remix Single - go to perfectbeat.com
There is a funny back-story as to how this came in existence. Months ago when we first heard the mixes were being done, we contacted Warner to ask for the tentative release date. We were told that there were NO plans to release this as a single, and the mixes were done simply to market her new greatest hits CD, ‘Crystal Visions’. Over the next few weeks we had several conversations with Warner about the possibility of getting a limited pressing just for Perfect Beat. We were sure we had it.
Three weeks ago we got the call from Warner telling us it COULD be done, but it was going to take too long to get everyone to sign off on the project. So what they did was ‘sneak’ the single out. They slated it for a full commercial release, but the catch was, they were only going to press up 1,000 singles. It was going to be distributed through the normal Warner distribution channels. We were told to immediately place an order (that day) to lock in a quantity and it would essentially be a Perfect Beat exclusive! Unfortunately, many retailers and online retailers get automatic quantities allocated to them for new releases so we couldn’t grab all 1,000 like we wanted to. We did however score HALF of them, 500 and they are now here in the building. 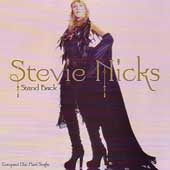 TRACKS:
Tracy Young Take You Home Mix (11:26)
Tracy Young Take You Home Dub (11:32)
Tracy Young Take You Home Mixshow (6:56)
Ralphi's Beefy-Retro Mix (11:12)
Ralphi's Beefy-Retro Edit (7:32)
Morgan Page Vox (7:02)
Morgan Page Dub (7:01)
Warner has told us straight up, the ONLY reason this CD single is available is because of Perfect Beat. The truth is, CD singles are dying. But we are convincing labels to press up a limited number just for us die-hards that appreciate CD quality music, artwork, and a sweet package! So we present to you this very special release. We ask once again that you purchase this, even if you already obtained it through other shady means. We promise, it will make it easier and easier when we talk to Jive, Interscope, Epic, Sony and RCA and ask for special pressings as well. Did we mention “Edge Of Seventeen” is being remixed right now by Peter Rauhofer? Sure would be a shame if that never came out.
label: Warner added: 8/07
Nickslive at Friday, August 24, 2007
Share