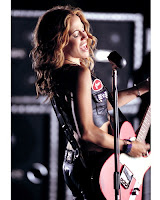 LOS ANGELES (AP) — Sheryl Crow says she'll soon be singing with Fleetwood Mac, a move sure to give new life to the classic rock band, which hasn't toured in several years.

"I don't want to make any official announcements, but I will say that we definitely have plans for collaborating in the future, and we'll see what happens," Crow told the AOL music Web site Spinner.com in a story posted Thursday.

The 46-year-old singer didn't give a date, but said it could happen next year.
She's already thinking about what she'd like to perform. "I'd love to do `The Chain,' I'd love to do `Second Hand News,'" Crow said.

Crow said she looked forward to working with friend Stevie Nicks. "I think the person I learned the most hands-on from is Stevie Nicks because she allowed me not only to co-write with her but also to produce her, and she's a true artist," she said.

Crow would give the band and Nicks a boost. According to Spinner.com, Nicks had said she wouldn't continue with Fleetwood Mac without keyboardist Christine McVie, who retired from touring in 1998. McVie joined Fleetwood Mac in 1970 shortly after marrying the band's bass guitarist, John McVie.

Fleetwood Mac last toured in 2004.
Crow is currently touring after the release of her latest album, "Detours."

Phone and e-mail messages left with representatives for Fleetwood Mac and Crow were not immediately returned.