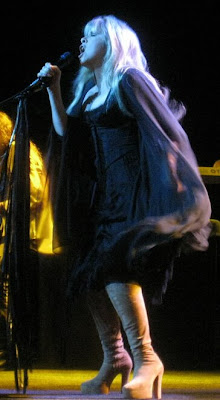 Stevie Nicks has lined up an abbreviated schedule of solo dates for late spring and early summer as talk heats up of new developments on the Fleetwood Mac front.
The veteran singer, who mounted a co-headlining tour last year with Chris Isaak, as well as her own solo trek last summer, will play two dates in April and three in June, with the first coming April 18 in Reading, PA. The Grammy-award-winning singer's latest release, "Crystal Visions ... The Very Best of Stevie Nicks," is a collection of songs from her three-decade career as a solo artist and member of Fleetwood Mac. The CD, which hit stores last Spring, features several previously unreleased live tracks and a couple of dance remixes, while the DVD comprises 13 videos with voiceover commentary by Nicks. The DVD also includes never-before-seen home video filmed during the making of Nicks' five-times platinum "Bella Donna" album, according to a press release.

Fleetwood Mac made news earlier this month when singer/songwriter Sheryl Crow told an AOL-affiliated music website that she's planning on joining the band sometime next year. It is currently unclear what role Crow will play in the band or when the group and its new collaborator would tour or record together. "We definitely have plans for collaborating in the future and we'll see what happens," Crow reportedly said. Crow essentially would replace Christine McVie, who has retired from touring, in the group.
Nickslive at Thursday, March 20, 2008
Share