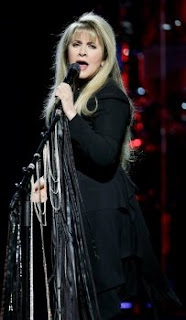 Stevie Nicks began an abbreviated schedule of late spring and summer solo dates April 18 in Reading, Pa., hoping no doubt to continue the string of generally glowing reviews she received for her 2007 dates both with Chris Isaak and on her own.

In recent weeks, however, most of the chatter has been not about Nicks or her tour, but the band she sings with, Fleetwood Mac.

Late last month, the veteran rock group's plans to tour in the first half of 2009 became known when Sheryl Crow, who is close friends with Nicks, announced she might be joining the Mac lineup on the road.

Singer Lindsay Buckingham has confirmed that Mac is planning to tour, but says Crow's involvement is not yet a done deal. "I think we were all a little surprised she (Crow) was announcing that to the world with such certainty," Buckingham told Billboard magazine. "We have talked about the possibility of bringing another woman into the scene to kind of give Stevie a sort of foil and shake it up a little bit. She (Crow) was certainly a name that has come up. We'll have to see."

Nicks is still promoting her late 2007 CD/DVD release, "Crystal Visions ... The Very Best of Stevie Nicks," a collection of songs that samples material from her three-decade career as a solo artist and member of Fleetwood Mac.

The CD portion includes several previously unreleased live tracks and a couple of dance remixes, while the DVD has 13 videos with voiceover commentary by Nicks and an audio interview with the Grammy Award-winning singer by journalist David Wild.

Buckingham and Nicks joined Fleetwood Mac in 1974, and with their help the band topped the charts with "Fleetwood Mac" in 1975, followed by 1977's "Rumours," which sold more than 17 million copies and is one of the best-selling albums of all time.

Nicks, who will turn 60 on May 26, is known for her tempestuous singing and mystical Gypsy hippie-persona. She started her solo career in 1981 with the "Bella Donna" CD, which made it to No. 1 thanks such hits as the Tom Petty duet "Stop Draggin' My Heart Around," the Don Henley duet "Leather and Lace" and "Edge of Seventeen (Just Like the White Winged Dove)."

According to an interview for the May issue of Q magazine, Nicks is working on a new solo album. "I've been writing continually," she said as she handed the interviewer a sheet of paper with a composition titled "The Soldier's Angel," inspired by her charity work. "It's one of the many poems that is ready to go to the piano right now.
Nickslive at Saturday, April 26, 2008
Share