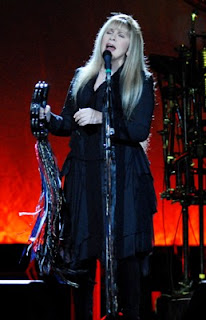 Stevie Nicks
Saturday, June 7
Hard Rock Live
Browardpalmbeach.com
Better than: Watching Stevie Nicks 10 years from now.
The body of Stevie Nicks turned 60 last month. Her voice has been 60 for a while.
Maybe it was all that coke in the '70s, or maybe it was that her vocal cords weren’t durable enough to handle her preferred mode of singing. I suspect it was the latter — Stevie’s always cited Janis Joplin as a prime influence, but she never had Janis’s chainsaw pipes, nor the dubious good fortune to die at 27. In the '70s, Stevie Nicks performed like a blues shouter even while her recorded output highlighted a voice better suited to witchy balledeering, and even back then her fans worshiped her primarily as a crone in the making.
She’s not in-the-making anymore — now she really is a crone, and her fans love her for it. They went genuinely apeshit at the Hard Rock Hotel and Casino last night, with the first twelve rows erupting into near-moshing when guitarist Wally Wachtel ended a long solo by segueing into “Edge of Seventeen." The Hard Rock isn’t known for volatile crowds, and the reactions down front were more intensely physical than anything Aerosmith ever got in the same venue. Nicks fans are passionate people.
They’re also, I might add, exactly the same demo you might have seen at a Hillary Clinton rally a few short months ago. They are overwhelmingly white, female, and middle-aged, with a few old hippies tossed in for grit. There’s plenty of lesbians and skinny young white girls who can’t dance, but are willing to try. I counted four blacks in the auditorium. All of these people are madly in love with a white, 60-year-old woman with a sometimes-grating voice and a history of relationship trouble. Their devotion is so intense that, when fully demonstrated, it looks a little creepy.
In the case of the Nicks fans, you can understand why. Despite the shocking limitations of her vocal range — which I’m pretty sure doesn’t even span an octave anymore — Nicks’ performance is surprisingly muscular. Heartfelt too, which is even weirder (how a singer can stay attached to a song like “Gold Dust Woman,” which implores you to “Rock on ancient woman/follow those who pale in your shadow,” is anybody’s guess). Since Stevie’s touring in support of a greatest hits package (Crystal Visions), her current show sticks mostly to the lollipops that even non-Nicksians can dig, but she never sounds tired of the material. Last night, she seemed most engaged when tearing into the most obvious of chestnuts, like a huge, raucous version of “Stand Back” or the long slow build of “Rhiannon,” which she brought to an acceptably molten climax (she’s been fiddling with the end of that song since 1975, and only now has she finally gotten it right). She only seriously faltered when she tried doing something new, like a version of Zep’s “Rock’n’Roll” which was a whole helluvalot more staid than the original, or a version of Dave Matthews’ “Crash Into You” that made you appreciate Dave’s charms as a singer.

The set was under two hours but felt a little longer, probably because Stevie kept darting backstage to change bits of her costume. Since all of her costumes were pretty much identical, it’s hard to say why she bothered. If I were her, I would have used that time to do something about my boots. Stevie Nicks’ footwear looks like some kind of medieval torture device, equipped with huge, cruel heels that force her to do the entire show en pointe. This may be the reason Stevie refused to move around the stage during the show. Not once did she come over to our section, off to the side of stage left. She remained glued to the five feet around her monitors at center stage, and though she seemed mobile enough in that circumscribed little area, it would have been nice to see her up close — especially since those of us at the sides of the arena couldn’t see the video screen mounted behind the drummer (I assume that’s where it was mounted — like I said, I couldn’t see it). We were starved for visual stimulation, but Stevie didn’t care.

The long-time Stevie fan sitting next to me noticed this, and complained about it. She also noted that Stevie should stay the hell away from Dave Matthews songs, and commented on the unfortunate state of Stevie’s vocal cords. Even so, she said she “loved the concert” and thought it was “wonderful.” This is what it means to be a fan of Stevie Nicks, or even Hillary Clinton: it’s not the execution that matters, but the gusto of the attempt.