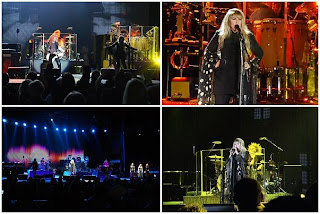 Legends don’t have to.

The rock and roll gypsy has twirled her way through a career of dreams, mesmerizing her faithful fans for more than 30 years now.

With flowing chiffon and lace and a leathery voice, Nicks has pretty much kept her style throughout her time with supergroup Fleetwood Mac and a successful solo career that is being highlighted on her current tour.

Nicks spins her way here for an appearance at the Toledo Zoo Concert Series at 7:30 p.m. Wednesday, in a show that will focus on solo material, with a few of her Mac classics tossed in. At 60, she seems to always be on tour — alone, with Fleetwood Mac, or even, as she did a few years back, with Eagles member Don Henley.

She rose to fame in the 1970s when she and then-boyfriend Lindsey Buckingham, whom she met in high school in California, joined the British-based band Fleetwood Mac.

Mick Fleetwood, the band’s drummer and leader, heard the two on a demo tape, and without even an audition asked them to join himself, bassist John McVie and singer-keyboardist Christine McVie.

The band made history with the 1977 release of “Rumours,” which stayed at No. 1 on Billboard’s charts for 31 weeks. It became the biggest selling album in history at that time, with sales of 19 million in the United States and 30 million worldwide. It won a Grammy for album of the year and included “Dreams,” a Nicks classic which also hit No. 1.

“Rumours” was a follow-up to Fleetwood Mac’s 1975 self-titled album that also topped the charts, thanks largely in part to Nicks’ hit single “Rhiannon,” and her unforgettable “Landslide.”

In the process, she created mysterious rock goddess persona on stage in the pre-MTV days. She was aloof and sexy and rarely gave interviews.

She was dubbed “Queen of Rock” by Rolling Stone magazine, causing friction among Mac’s members that resulted in brilliant songwriting but the end of relationships.

Nicks and Buckingham had actually achieved some mild success as a duo before joining Fleetwood Mac. The sounds that drove the early success of the group can be heard on the cult classic 1973 “Buckingham Nicks” album.

Through all the fighting and broken relationships – Nicks and Buckingham split, the McVies divorced – the band continued on with tremendous success. But in 1981, Nicks launched her solo career, which was immediately successful.

“Bella Donna,” her debut album, sold 5 million copies, hitting No. 1 and spawning the hits “Edge of Seventeen,” “Stop Draggin’ My Heart Around” (with Tom Petty), and “Leather and Lace,” (with Henley) — all still staples on classic rock radio.

It didn’t spell the end to Fleetwood Mac, however, as Nicks has weaved her creativeness between both ventures while becoming one of the biggest influences on a generation of female rockers, actually writing more hits as a solo act than she did for the band.

Including greatest hits packages, she’s released nine solo albums and had major hits in the ’80s like “Stand Back,” while still cranking out timeless songs for FM like “Sara” and “Gypsy.”

Her songs stand the test of time, a clash of mystical poetry with a raw rock sound that appeals to both her male and female fans.

“I was only doing my solo career to have another vehicle for my songs,” Nicks told Q. “When you’re in a band with three writers [including Buckingham and Christine McVie] and you do a record every two or three years and there’s 12 songs on an album, that’s not much for somebody that writes as much as me. I adored being in Fleetwood Mac.”

She was back touring with Mac most recently in 2003 when the band (without Christine McVie) launched “Say You Will,” its first studio album in 13 years. Still oil and water off stage, Nicks and Buckingham remain magical together on stage.

Her personal history has been told over and over — battles with drugs, a soap-opera love life that included Buckingham, Fleetwood, and her record-producer Jimmy Iovine, as well as Henley and fellow Eagle Joe Walsh.

Except for a very brief marriage to the widower of her best friend from childhood, Nicks has remained single and never had children.

When VH1 made its century-ending list of greatest women of rock in 1999, Nicks was on it at No. 14. Of course, viewers had another opinion, ranking her No. 1.

In recent days, Nicks has devoted herself to causes such as support for wounded soldiers at Walter Reed Army Hospital in Washington, aiming to use music in the rehabilitation of soldiers wounded in Iraq and Afghanistan. She gives hundreds of iPods away on her frequent visits.

Last year she released another greatest hits package, but hasn’t done a studio album since “Trouble in Shangri-La” in 2001.

Perhaps life on the road led to the recent selling of her mansion near Phoenix in a “downsizing” effort, Nicks said. She spends more time away, even now, than she does at home.