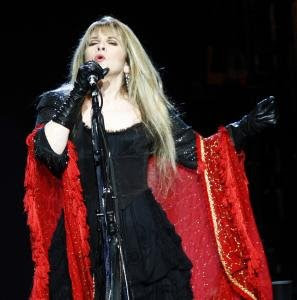 As if anyone needed a reminder of the influence Stevie Nicks has had on pop music, "Bootlylicious," the Destiny's Child hit built on a sample of Nicks's "Edge of Seventeen," was piped over the house public address system before we got the real thing Sunday night.

The appetite-whetting tease was one not-so subtle reminder - opener Mandy Moore being the other - of the vast difference between a pop star and a genuine artist. As one of rock's most successful songwriters and original voices, both with and without Fleetwood Mac, Stevie Nicks is both.

When the first signature twirl of her gold-flecked shawl came, mere moments into a percolating and percussive "Stand Back," Nicks's fanatically devoted audience roared its approval. It was an auspicious start to a two-hour, career-surveying set at the Bank of America Pavilion that was crammed with many highs and few lows: beloved evergreen hits, power-ballad misses, and poignant moments.

Impeccably supported by a seven-piece band led, as always, by longtime musical director and guitarist Waddy Wachtel, as well as a trio of backup singers, Nicks took a twirl and a tour through a catalog more than three decades deep, and nearly as wide. Considerably less wide, however, was the 60-year-old Nicks's vocal range.

While her voice, clear and strong in the sound mix, was as inimitable and often as affecting as ever, it stayed, for the most part, within a narrow melodic framework. There were fewer highs hit on a still-graceful but somewhat flat "Dreams," for instance, the song's gilded edges blunted and gauzy embroidery all but cleared away. And why perform a flaccid cover of the Dave Matthews Band's turgid "Crash Into Me" when we didn't get "Gypsy" or "Sara", or any number of other Nicks classics?

As if to make up for this brief (but unfortunately not brief enough) lapse in judgment, Nicks and Co. offered a dramatically stirring "Rhiannon," then hit soon after with the baleful, brewing storm of "Gold Dust Woman." A pulse-quickening version of "Edge of Seventeen" was an epic curio, stretching into a well-meaning but distracting meet-and-greet receiving line with the adoring faithful.

If an encore cover of Led Zeppelin's "Rock and Roll" was the night's throwaway thrill, then "Landside," a tender meditation on the passage of time, was its most elegiac moment. Nicks dedicated the song to her late father, and gave it a gorgeously glistening reading as family photos of dad and daughter gently bled into one another on the stage screen.

Onetime pop goody-two-shoes and perpetual smiler Mandy Moore opened with a cloying 45-minute set of karaoke-bar cover songs meant to demonstrate how, at age 22, she's all grown up and has discovered Cat Stevens and Joni Mitchell. With a voice and personality as bland as generic toothpaste, the fact that Moore's been handed an enormous public platform to say absolutely nothing original felt like an insult to the artists she so earnestly covered.
Nickslive at Tuesday, June 24, 2008
Share