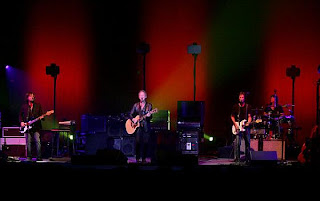 By GEORGE A. PAUL
The OC Register

Lindsey Buckingham’s return to the Grove a strong one

Review: Two years since a solo acoustic gig there, Fleetwood Mac’s studio mastermind fleshes out his solo sound with a band.

For the Lindsey Buckingham completist, this was as good as it gets.

During an exceptional, nearly two-hour show Friday night at the Grove of Anaheim, the Fleetwood Mac singer-guitarist-studio-wiz touched upon virtually every facet of his lengthy career. Buckingham’s wife and young children were present, a likely catalyst for his relaxed and chatty demeanor.

Unlike the last tour – which arrived at the Grove in late 2006 – Buckingham indulged fewer guitar showcases alone. (See “Live at the Bass Performance Hall,” released earlier this year, for a fine example of that). His tight three-piece band this time out, including keyboardist-bassist Brett Tuggle (a veteran of Fleetwood Mac and Stevie Nicks treks) and guitarist Neale Heywood, rocked plain and simple.

Since Buckingham compositions were continually given over to the Mac, 14 years elapsed between his third solo disc, “Out of the Cradle,” and the mostly acoustic effort “Under the Skin.” But this past week the impressive “Gift of Screws” (a title based on an Emily Dickinson poem) arrived in stores – the veteran musician is definitely making up for lost time. 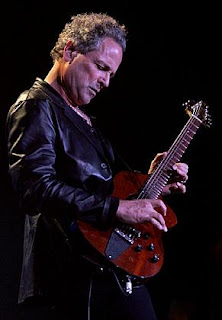 Buckingham employs a unique, self-taught finger-picking style on electric and acoustic guitars. The result is a distinct sound that can be a wonder to behold live.

In Anaheim, half of “Screws” comprised the 20-song set, kicking off with the churning new “Great Day,” where Heywood, Tuggle and their boss traded overlapping harmonies. (Click here for a complete set list.) Solo hits from the ’80s like “Trouble” and “Go Insane” were played back-to-back, each done in full-band mode. The former had a gorgeous rhythmic sweep; the latter, an almost country-rock vibe with cascading vocals from all three guys.

The evolution of 1987’s “Big Love” was described “an ensemble piece before I took leave of the band to relieve my sanity.” Buckingham, 59, said refashioning it for just voice and guitar became a template for future work. “I’d been living a narrow life” until I got married. “Now the song has taken on a sense of irony.” Watching Buckingham’s manic buildup and nimble fretwork on flamenco-styled guitar during that song never gets old.

One of the evening’s oldest tunes was “World Turning” from the Mac’s self-titled 1975 album. It’s been a frequent part of that band’s gigs ever since. The crowd didn’t have to endure Mick Fleetwood’s loony human percussion shtick here, but Reyes’ extended spotlight was clearly a tribute. 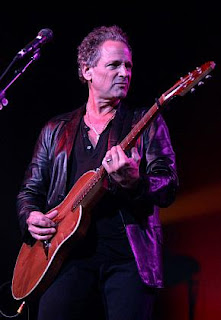 Some lighthearted moments occurred during the rarely played “It Was You,” a “rock nursery rhyme written for my kids,” as Buckingham described it. Halfway through the breezy tune, with more cascading vocals, his son and daughter tentatively strolled on stage to add percussion, proud papa beaming throughout.

Buckingham also pulled out the strange and bombastic “Come,” off the Mac’s shamefully ignored 2003 reunion effort, “Say You Will.” It was a “bathroom break” tune when I reviewed them at Verizon in ‘04, but fans at the not-quite-sold-out Grove stayed seated. (I would’ve picked something more melodic off that disc, such as “Bleed to Love Her” or “Steal Your Heart Away,” and given either one a tweak).

“Gift of Screws,” meanwhile, is chock-full of potential adult rock radio hits. The yearning first single “Did You Miss Me?,” with its memorable chorus, came across even better in concert, for instance.

Once Buckingham and company reached the home stretch, the audience was on its feet, wildly clapping along to exhilarating old “Rumours” faves “Go Your Own Way” and “Second Hand News.” All told, Buckingham proved he’s still a force to be reckoned with.