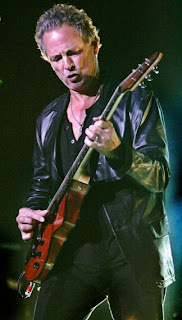 The line can get fine between surprise and mystery; there was some of both Sunday night at the Uptown Theater. The surprise: The size of the crowd — about 600 — which was about half the size of the crowd that showed up the last time Lindsey Buckingham was in town.

The mystery: why this guy isn’t regularly included in discussions of great rock guitarists.

He and his three-piece band played for two hours Sunday night. By all measures it was a good show. Sound was great. Nice light show. Great set list. Very entertaining.

I love the Uptown (which will be rocking tonight), but they could have slipped this show into Liberty Hall or the VooDoo and cut out some of the emptiness. The vibe is always a little off when the place is less than half-full.

Buckingham made the most of it. So did his fans, most of whom came as much for the solo material as they did for the Fleetwood Mac nuggets. 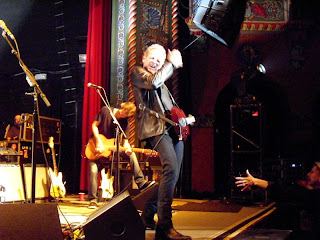 He started with two from his new album, “Gift of Screws,” then three tracks that were encore-worthy: “Trouble,” “Go Insane” and “Tusk,” the evening’s first Mac song.

He followed that with another “Tusk” track — a rollicking, amped-up version of “I Know I’m Not Wrong.”

He sent the band off stage towards the middle of the show for a solo/acoustic set that included one of three “Rumors” tracks, “Never Going Back Again,” and one of Fleetwood Mac’s last hits, “Big Love.” He pulled a couple tracks off the “Fleetwood Mac,” too: “I’m So Afraid” and “World Turning.”

The setlist blended plenty of new material with the old. Some of it dovetailed nicely with those Fleetwood Mac songs, especially “Did You Miss Me” and the “Screws” title track, both of which would have fit in perfectly on “Tusk.”

A lot of folks were familiar with those new cuts, but two tracks off “Rumours” got the biggest response: “Go Your Own Way,” which finished the set, and “Second Hand News,” which opened the encore. “News” sounded particularly sweet. 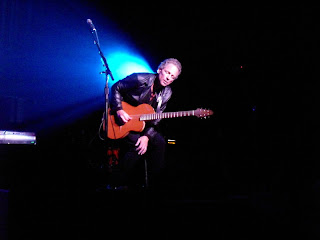 No matter what album or era he visited, Buckingham showed off his inimitable guitar style — plectrum-free — and prowess all night. His fingers are so quick and nimble, he can play rhythm and lead at the same time. During some of his more elaborate instrumentals, it sounded like two people were playing. He makes it look effortless –like a guy who still spends hours a day practicing. At the end of several numbers, he pulled his guitar to his chest and embraced it, as if it were one of his children.

His “smoke-and-mirrors” light show deserves mention for its simplicity and effectiveness: spotlights bouncing off mirrors, often with heavy wisps of fog drifting by in the background. The sound was as good as I’ve heard in the Uptown recently, even with the place about two-thirds empty. This was a show with a big-name, designed and equipped for a big theater. Too bad it didn’t get the kind of crowd it deserved.