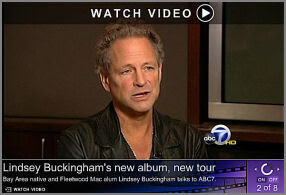 Hall of Fame musician Lindsey Buckingham is celebrating the release of his new CD, Gift of Screws next week by launching a national tour that kicks off at the Mountain Winery in Saratoga Sunday night.

For Buckingham, it's coming back home.

ABC7's entertainment reporter Don Sanchez sat down with Buckingham at the Warner Brothers studios in Burbank.

Download the interview - it's about 18 minutes or so, and click this link to watch the video interview.