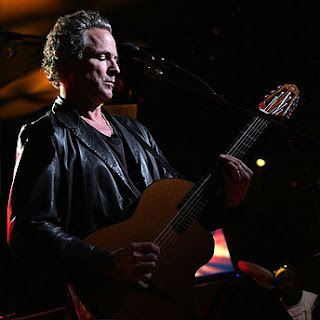 In 2001, Fleetwood Mac's Lindsey Buckingham had the intention of recording a solo album, but then his band showed up. "They said, 'Let's do a studio album!'" says Buckingham. "So the bulk of that material was folded into [2003's] Say You Will." Three years later, Buckingham finally struck out on his own with Under the Skin, a moody collection that highlights his virtuosic fingerpicking. On September 16th, Buckingham released a far more rocking sequel: Gift of Screws, named after an Emily Dickinson poem, is a wide-ranging collection of 10 songs he's written over the past decade. "I told the band that I wanted to be left alone for three years," he says, "so I could follow through with my plan: to put out two albums and to tour behind them."

The past 10 years have been particularly joyful for Buckingham. "There was a period where I was leading a fairly narrow life, focused exclusively on music," he says. "The past decade has been a revelation to me. Meeting my wife and having three beautiful children has infused another level of enthusiasm and optimism. You can get a sense of that in the new work." While the new disc displays the intensity that marks much of his solo work, there are moments of uncomplicated joy, such as the buoyant opener, "Great Day." And when John McVie and Mick Fleetwood join in on the galloping "Wait for You" and "The Right Place to Fade," you'll be transported to Fleetwood Mac's heyday.

After touring to support Screws through October, Buckingham will reunite with his bandmates again next spring for a tour. In March, Sheryl Crow announced plans to collaborate with the band, but Buckingham says the idea never moved beyond a casual conversation. "If you're bringing someone in just to do Christine McVie's stuff," he adds, "doesn't that sort of degrade it into kind of a lounge act?"