The beat goes on for Mick after 40 years 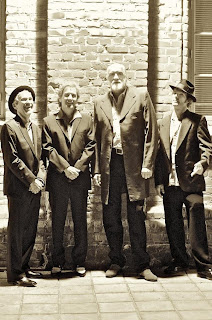 He was in one of the biggest bands of the '70s, so what's Mick Fleetwood doing in Holmfirth? He talks to Sarah Freeman about growing older, his love of blues and the infamous Brit Awards.

Mick Fleetwood has more than earned his place in musical history.

The driving force behind Fleetwood Mac, the Cornwall born-drummer lived through the excesses of the 1970s, battled drug addiction, survived bankruptcy and having to up sticks to America, and he remains the only original member of the band which has released 50 albums to date.

However, after playing pretty much every stadium going, next week Fleetwood's large 6ft 6ins frame will be occupying a much smaller stage, when he brings his blues band to the Holmfirth Picturedrome.

"I'm a blues man at heart and playing these intimate gigs is a real joy," says the 61-year-old.

"Everything from the Beatles to the current crop of guitar bands have their roots in blues and it was a big part of the Fleetwood Mac legacy.

"There's something about that sound which gets people's feet tapping, it's a real emotional connection. On a tour like this there's not the huge circus which accompanies a Fleetwood Mac gig. It's just four guys in a band playing for other die-hard blues fans."

During his 40 odd years in the business, Fleetwood has had the opportunity to play with the likes of Eric Clapton and BB King, but he gives the impression that as long as he had his drum sticks and an audience he'd be happy.

"When I started out, people played music for the sheer love of it," he says.

"Of course we all wanted to get signed, but that was always seen as a bonus. Now bands have too high expectations and the music industry is a much bigger machine. People are dropped if they don't make it after the first couple of years and to me that doesn't seem right. Bands need time to mature, to experiment, but today they aren't given the time to develop.

"For me and many of the other bands around in the late 1960s and early 1970s, it was never about the money or the lifestyle, it was about getting out there and playing to audiences."

While drumming may have been his true love, he did indulge in the lifestyle which came with fame, squandering thousands on drink and drugs. He admits he never bothered about his finances and, despite earning millions, in the mid-1980s, Fleetwood was declared bankrupt.

"I screwed some things up back then," says.

"I am honest about that side of my life.

"I spent a lot of money on drugs, I went bankrupt and personally things weren't going well. I don't mind talking about it, it's not something I want to cover up, but I do get fed up when that's all people want to talk about. Throughout my life, good times and bad, the one thing which has always been constant is music.

"A lot of other things were affected, but whatever else happened during my journey through life, the music has kept on going."

If Fleetwood became a pin-up for the perils of the music business, he also became a laughing stock after co-hosting the Brit Awards with Samantha Fox back in 1989.

The live show was shambolic, lines were fluffed, guests failed to show up and Fox and Fleetwood looked like an increasingly desperate odd couple.

For the following 18 years the show was pre-recorded.

"It was so not our fault, but it was absolutely crucifying," he says.

"We had rehearsed, we knew our cues, but on the night we were confronted by 300 screaming boy band fans who completely drowned out the people on the walkie talkies.

"I felt really sorry for poor little Samantha, but hey these things happen."

Now living in Hawaii with his second wife, Lynn, and twin six-year-old daughters Ruby and Tessa, life is certainly much calmer than it was back in Fleetwood Mac's heyday.

"I am the happiest I have ever been or at least the most content," says Fleetwood.

"I'm more aware of the need to be involved in my daughters' lives and I'm much more involved with the family than I was before.

"We are all in control of our own destiny, but when you're in the music business, sometimes it's hard not to believe your own hype."