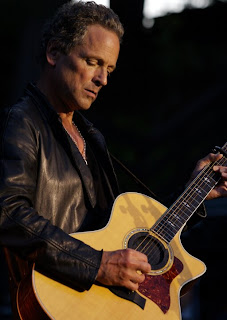 
I listen to a lot of new music, and much of it leaves me flat.

I don’t know whether it’s the music or my age, but I began to suspect the latter when I received Lindsey Buckingham’s new CD, “Gift of Screws.”

Wow, is it ever good.

Is it hip to admit you like the new Lindsey Buckingham CD?

Yes to both questions, as it turns out.

After all, the Fleetwood Mac frontman long ago moved beyond the California rock that made that once-famous band famous again in the mid-’70s.

The songs in “Gift of Screws” are catchy, of course, but they are also kind of crunchy.

Only one song, “The Right Place to Fade,” sounds like it could have come off “Rumours.”

At the risk of using an adjective that is so overused it almost signifies its opposite, “Gift of Screws” is timeless.

In a phone interview, Buckingham said he doesn’t set out to make “timeless” music.

“I don’t think anyone writing music and putting together material does so with the objective of making it timeless,” he said. “We’re all just goofing around. Hopefully, in the process of that, we manage to make something that works.

“I just feel thankful when I get to the end of something that it is actually finished and it turned out OK,” Buckingham said. “ ‘By the skin of my teeth’ is always the sense I have.”

Buckingham performs tonight at the Murat Egyptian Room in Indianapolis.

These days, Buckingham has the luxury in his solo career of doing whatever pleases him: He doesn’t need the money and he doesn’t have anything to prove, he said.

But it wasn’t always thus.

“What really started me making solo albums was what I perpetrated in the wake of the mega success of ‘Rumours,’ ” he said. “Namely, the ‘Tusk’ album. That was a left turn.

“It was a bit risky and was, to some degree, confounding of people’s expectations.”

Where “Rumours” was filled with ingratiating hits, “Tusk” was a crazy quilt with occasionally cacophonous stuff that reflected the emotional chaos within the band.

“It wasn’t ‘Rumours 2,’ ” Buckingham said simply. “And because ‘Tusk’ did not fulfill someone’s idea of what the requisite number of sales should have been, the band decided it was not going to do anything like that anymore.”

“That decision created a line of solo material that was free of any artificial impositions about how things should be done and not be done,” Buckingham said.

If Buckingham’s words sound bitter, the man himself is not. He said he has mellowed considerably over the years.

“I have grown as an individual,” he said. “For a long time, I led a very emotionally defended life. Then I met my wife (Kristen Messner) and we had three kids. I have enjoyed the fruits of a lot of good karma.”

Buckingham has nothing but pride in the behemoth known as Fleetwood Mac, but he admits his outlook wasn’t always so upbeat.

When he first joined the band, he had to perform a lot of material that wasn’t his and mesh with people who had played together a long time. And then, of course, the band members decided (unsuspectingly) to mix business with pleasure, which led to a mix of business and resentment.

“The interpersonal dynamics were challenging,” he said. “It is difficult to break up with someone and see them move away slowly or not so slowly and then try to find it within yourself to keep doing your job in the band and doing it well, that job being constructing the music for everyone.”

“It wasn’t always easy to feel unconflicted about that,” Buckingham said. “Also, obviously, we lived in a subculture where no one was taking care of themselves very well.”

When the band reunited in 1997 for a tour and live album, there was still lingering bitterness. That began to dissipate only recently, Buckingham said.

What people have to remember, Buckingham said, is that Fleetwood Mac’s sense of itself is more about the relationships than the hits.

“All of that is something that remains and is more present to me now than any of the success,” he said. “Bands are a lot less connected to their success than what goes on behind the scenes.”

Buckingham said he has started finally to bury the hatchet with former lover Stevie Nicks, and the unwitting catalyst for this was singer Sheryl Crow.

In March, Crow announced that she would be replacing former member Christine McVie in Fleetwood Mac, and the band quickly unannounced it.

“That was ridiculous,” Buckingham said of the debacle. “We’d had a very hypothetical conversation with her.”

Buckingham said Nicks was craving for “more female presence onstage” in the wake of McVie’s departure, and the band floated a trial balloon with Crow.

Apparently, Crow floated away on it.

You can’t really blame Crow for her enthusiasm.

“Sheryl took it upon herself to tell anyone and everyone that she was joining Fleetwood Mac, an announcement that wasn’t just premature, it wasn’t on solid ground,” Buckingham said.

But the misunderstanding led to “some good conversations” between Buckingham and Nicks.

“That’s one thing that came out of this Crow thing is that we started talking,” he said. “We acknowledged that we do need to approach whatever is going to come in the sense of caring for each other as people more than anything.”

Buckingham said it is unlikely that anyone will replace McVie at this point.

The band has none of the pressures it experienced in the ’70s, Buckingham said, and that frees it up to focus on more important matters.

“We just have to enjoy each other as people up there (onstage),” he said. “We don’t have to have any more musical agendas. It is absurd for us to try and keep competing with bands in their 20s.”
Nickslive at Sunday, October 05, 2008
Share