Giving people what they want 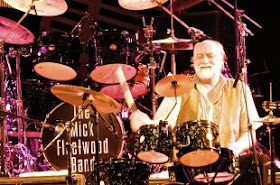 The Mac are back
Croydon Guardian
Monday 27th October 2008

They may have been in the music industry for more than four decades - but legendary rock group Fleetwood Mac are not quite ready to hang up their instruments just yet.

Next year the four-piece are hitting the road again on another world tour, the first time they will have worked together in four years - and they are even managing to keep the same line-up.

Sixteen different musicians have at some point played parts in the band’s history, but only Mick Fleetwood survives from the original members who first appeared at the Windsor Jazz and Blues Festival in 1967.

“It is sort of like the Rolling Stones or U2,” said Fleetwood, who will be joined on tour by John McVie, Lindsey Buckingham and Stevie Nicks.

“They take breaks but keep on coming back and keep going. If people stop watching and enjoying us then we will know they have had enough.”

The tour will be a new experience for the band as they have no plans to release a new album at the same time but will instead concentrate on playing their classics.

“For the first time we are not going to have a new album to go along with the tour so we are just going out to have a lot of fun, it will be totally unique,” said Fleetwood.

“When we do an album we tend to want to play the new stuff and people have to put up with songs they don’t know, this time we are going into our back catalogue and giving people what they want.”

Despite being in his sixties Fleetwood is still full of love for the music industry and is currently touring with his blues band that includes former Mac Rick Vito.

“It is the same thing as if you were talking to BB King or Tony Bennett now,” he said.

“There is a bunch of people that tend to come from my generation of musicians where we started this not to be rich and famous, we started it because we wanted to be playing the music we love.

“We enjoy playing so much that we have been doing four of five gigs a week. Rick is playing his arse off on guitar.

“we have been playing together for a while and we take on some great old Fleetwood Mac stuff I haven’t played for 40 years and then we do some classics or not classics that we just like.”