Mick & Rick Interviewed and Filmed in Palm Springs for DVD 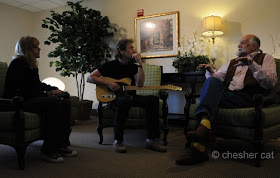 Deborah was a rock'n'roll photographer back when the music business was about the music. She has just released her new book "Everybody I Shot Is Dead", a collection of her photographs of the musicians who have passed, along with her personal stories.
"Are you able to film an interview with Mick Fleetwood and his band on Saturday afternoon in Palm Springs?"

It was originally a question for me to pass on to Tyler, since he's the one that just got out of NYU film school and has the mad shooting and editing skills. But he had a production meeting on Saturday afternoon for some reality pitch he was editing so I stepped in and organized the shoot. I found a guy with a camera and lighting package that could do it within the budget and, just like that, it was a go.

The purpose of the interview was to create a special features segment for a DVD of a concert they shot in London of Mick and his Blues Band. But then everything changed. The fates stepped in on Thursday and I was asked about the possibility of setting up a five camera shoot for the concert Mick was doing on Saturday night...