THE CURSE OF FLEETWOOD MAC HAS TURNED INTO A BLESSING 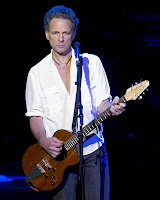 There's no new album, nor is Christine McVie onboard. No obvious reason for Fleetwood Mac to tour, unless you count a forthcoming re-release of "Rumours," the 1977 album that sold more than 30 million units.
There is the likelihood that "Fleetwood Mac Unleashed: Hits Tour 2009," which begins Sunday at the Mellon Arena, will be a blockbuster, playing to capacity crowds in the United States and Canada.
Yet Fleetwood Mac never has been a band of mercenaries, merely cashing in on their popularity. For the four current members of the band -- Lindsey Buckingham, Mick Fleetwood, John McVie and Stevie Nicks -- this tour is attractive because they aren't promoting new material.
"Some bands -- which is fine -- go around doing this year after year, year in, year out," Fleetwood, 61, said during a recent teleconference, "and, understandably, people love to hear songs they're familiar with. So having said that, that's a whole new experience for us as a band, presenting the very best we feel we can get on board and do."
"What it does is it kind of frees you up to enjoy each other a little bit more as people," said Buckingham, 59. "And the mantra is really more 'let's just have a good time' and value the friendships and the history that really underpins this whole experience that we've had over these years."
Since Peter Green started the band in 1967, Fleetwood Mac has emerged in various incarnations, starting as a blues-based outfit with a penchant for psychedelia. Christine McVie galvanized the sound, adding melody. Californian Bob Welch would further abet the transition from blues to pop, and his work on songs such as "Hypnotized" gave the band its first widespread exposure in the U.S. during the early 1970s.
When Nicks and Buckingham joined the group in 1975, the band's direction was irrevocably set. The taut and spare, just drums and bass, guitar and piano, became larger than life by way of its omnipresence in pop culture. The songs "Don't Stop Thinking About Tomorrow" and "Go Your Own Way" became standards, even mantras, for the masses.
Fleetwood, who, along with John McVie, 63, has witnessed and been part of every Fleetwood Mac lineup, said the revolving door that was the band ended up being a benefit.
"It's still about individuals experiencing and giving their individual thing without being totally swallowed by Fleetwood Mac," Fleetwood said. "And I think the nature of that is all because we changed so much through the years, and that ethic ... is always about pushing forward and changing and keeping it fresh.
"So I think the curse of Fleetwood Mac has turned into a final blessing over the years, that, creatively, we were able to hold our audience. Obviously, the band ... that's on the phone right now became the band that had the worldwide acceptance of it."
That said, Christine McVie -- arguably the strongest singer in the group's history -- is missed. Nicks noted that she still feels the absence of McVie, who has not toured with the band since 1998.
"I miss Christine everyday because she was my best buddy," said Nicks, 62. "She was my best friend. I probably spent more time on the road with Fleetwood Mac than anywhere, so I've spent more time with these people than I've spent with my own family. So the loss of Christine as one of my best girlfriends was horrific for me. But she's been gone a long, long time now. ... There's not a day goes by that I don't wish she'd call up and say, 'I'm back.' But she's not going to. We've all kind of accepted that."
A few years ago, the band made an overture to Sheryl Crow, who has toured with Nicks, to replace Christine McVie. Nicks admitted she initially thought Crow might provide a buffer between her and Buckingham. But Crow, after a few rehearsals, felt she could not continue.
Nicks agreed, telling her, "'You have survived breast cancer and Lance Armstrong. I don't think this is the right thing for you, Sheryl.'"
Nor was adding Crow the right way to approach any disagreements, perceived or real.
"The fact is that if Lindsey and I can't work out our problems by ourselves, we might as well throw in the towel," Nicks said. "So that's what we are currently trying to do, is work out our problems. And, certainly, another person could not do that for us."
The disintegrating relationships that fueled the album "Rumours" -- Buckingham and Nicks parted, and the McVies filed for divorce -- became part of the album's appeal as fans parsed the meanings behind the songs "Second Hand News" or "Never Going Back Again."
Buckingham -- who called the band "a group of great contradictions ... the members don't necessarily have any business of being in a band together because the range of personalities is disparate" -- did not think "Rumours" was autobiographical. For him, the songs were written in a "generic vein"; only with feedback did he realize how the songs reflected the band's disharmony.
"The whole idea of the tabloidism of that, the musical soap opera aspect of that, I think to some degree was revealed to us by our audience after the fact," Buckingham said. "The meaning of my songs, I can only say that they have shifted slightly in the same way that the meaning of the band has shifted. ...
"You tend to just sort of see the irony in the songs, and you tend to see, maybe, the heroicism, a little bit, that we possessed. We saw that we had this destiny, and we saw we had to rise above the personal difficulties. And we saw that the music could actually have redemptive power for us and could be a symbol of that to other people."
Nickslive at Wednesday, February 25, 2009
Share