FLEETWOOD MAC IN ONE INCARNATION OR ANOTHER 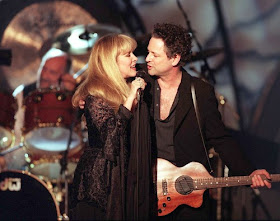 Fleetwood Mac, in one incarnation or another, has been making music — first it was straight blues, now it’s pop-rock — since 1967.
They started off playing in dark and dingy London clubs and, throughout the late-’70s and early-’80s, they packed the largest arenas in the world.
Their current three-month tour of North America marks the first time they’ve performed together in five years. They visit the TD Banknorth Garden on March 11, in support of their new “best of” album, “Unleashed.”
All four members of the band recently took part in a telephone conference call. Mick Fleetwood, Stevie Nicks and Lindsay Buckingham were in chatty moods; John McVie took on the role of silent partner.
The tour marks the first time since the band’s rise to prominence in the’70s that they’ve gone on the road without an album of new material; they’ll only be playing tunes from their fat catalogue of hits. But that doesn’t mean they’re through recording.
“This is a refreshing thing to do in terms of selecting a lot of really emotively connected songs to the audience,” says drummer Fleetwood of only playing the hits. “But there have been discussions for sure that we would love to make some more music. I think it’s sort of down to the biorhythms of how everyone is feeling and what’s appropriate. We have [solo] careers and families and different perspectives from what it would have been you know 20, 30 years ago. So I think the consensus is that we would love to be challenged to go out and do something with some new songs in a couple of years. My heart says I believe that will happen.”
Singer Nicks and guitarist Buckingham, who have done separate solo albums and tours over the years, are looking forward to the reunion for both personal and professional reasons.
“Solo work and Fleetwood Mac is a really great thing to be able to go back and forth to because you can do your solo work and then you can do Fleetwood Mac,” says Nicks. “ And then you can go back to your solo work and then you can do Fleetwood Mac. We’ve been apart for four years. Now we’re back together and we’re having a blast.”
Buckingham feels that not having to present new material and try to win audiences over on a first listening is a wonderful thing.
“It kind of frees you up to enjoy each other a little bit more as people,” he says. “The mantra is really more ‘let’s just have a good time,’ and we can value the friendships and the history that underpins this whole experience that we’ve had over the years. I think because of that we are actually able to just look at the body of work and choose from that. And then you know just have a little bit more fun with it than we would normally be able to have.”
Though no set lists have been put together yet, Fleetwood reveals that they’ll certainly be playing what he calls the obvious ones: “Go Your Own Way,” “Don’t Stop,” “Dreams.”
“But then we are finding songs as we go along that we feel are special songs that maybe aren’t considered the massive, massive hits but are truly emotionally connected to Fleetwood Mac,” he says, without naming them. “I feel really confident that we’re going to surprise the audience in some ways. I think that we’re going to make the audience identify with songs that they know. And we’ve had fun really re-sculpting certain segments of the show, which will remain secret until you see us.”
Buckingham is also keeping secrets, of sorts. Asked if there are any songs he wishes he didn’t have to play ever again, he first dodges the question, saying, “You know, we really have a body of music that we’ve been lucky enough to have become part of the fabric of the music culture.”
Then he gives in — but doesn’t name any songs — and says, “Certainly there is a challenge of being on the road in terms of the repetition. It’s almost the inverse of the challenge of being in the studio where you’re trying to pull stops out of the air; the challenge on the road is trying to keep things fresh night after night. But you know that’s part of being a professional and it’s also a part of being in a band where you’ve been together a long time and you can keep finding new things for those songs to mean to you personally and to share. It’s just part and parcel of what we do: to go out and recreate those same songs.”
The always outspoken Nicks, asked if she can believe she’s still singing in a rock band after all of these years, casually mentions, without prompting, that she recently turned 60. She follows that with a reminiscence of her first days with the band. 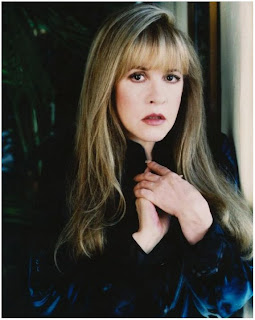 “When I joined Fleetwood Mac, I was 28,” she says. “I went on one tour with just my normal street clothes. I just threw my stuff in my suitcase and we left on like a three-month thing. We went to El Paso, Texas, to do a show, and I tried to put on a dress but unbeknownst to me I had gained five pounds. So the dress didn’t fit. I was screaming and I sat down and I started to draw an outfit. And I said to myself, ‘I’m going to have a uniform. My uniform is going to be such that I can wear it today at 28 and I can still wear it at 60. I’m going to wear the same skirt, the same little top, the same platform boots and some little jacket, and that’s going to be it. And I’m still going to be able to wear this at 60 because it’s not going to be so flamboyant that it can’t be worked with a little bit, and unless I weighed 300 pounds, I’ll still be able to wear this when I’m you know into my 60s. So, yes, I can believe it.”
Nickslive at Friday, February 27, 2009
Share